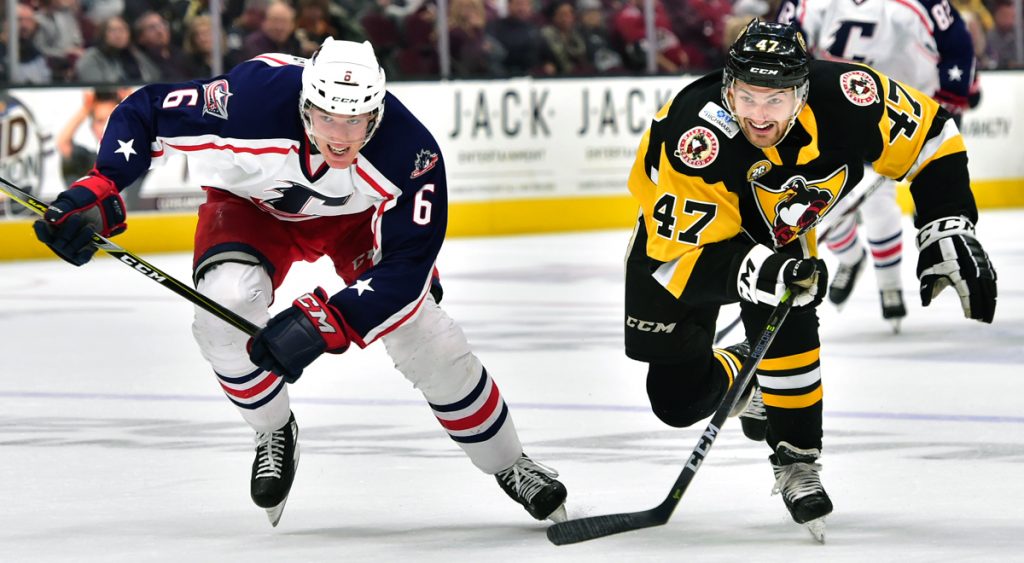 CLEVELAND, Ohio – The Wilkes-Barre/Scranton Penguins erupted with offense in the second period of their Saturday night game with the Cleveland Monsters en route to earning a 4-1 victory at Quicken Loans Arena.

Wilkes-Barre/Scranton (3-0-0-0) entered the middle frame trailing by a goal, but deposited three goals in short order to build a lead it never relinquished.

After being shut-out by Anthony Peters on Thursday night, the Monsters finally solved the Penguins’ netminder when Kevin Stenlund scored 7:30 into the game. Stenlund walked down the right wing, pulled the puck tight to his body so as to evade the poke check of a Penguins defenseman and then unloaded a wicked wrister to the opposite corner.

Anthony Angello tied the game for the Penguins at 3:13 of the second period, detecting a loose puck atop the crease and reaching his stick between his own legs to force it across the goal line. Three minutes and 45 seconds later, Jimmy Hayes slammed in a rebound for his first goal as a Penguin, making it 2-1. Derek Grant gave Wilkes-Barre/Scranton some breathing room by also depositing his first goal with the black and gold 2:57 after Hayes’ tally.

From there, Peters locked it down between the pipes for the Penguins, and Teddy Blueger tacked on an empty net goal for insurance. Peters finished the night having made 32 saves and improved his save percentage to .968 through three games.