Friday, Feb. 7 – PENGUINS 0 vs. Hershey 3
Wilkes-Barre/Scranton was shut-out on Friday night by the Hershey Bears. Despite a spirited five-on-three penalty kill early in the third period, the Penguins were unable to translate that success into offense. Wilkes-Barre/Scranton generated a total of 31 shots, all of which were stopped by Pheonix Copley.

Saturday, Feb. 8 – PENGUINS 3 vs. Lehigh Valley 5
After a rapid fire start that saw the two teams trade goals and a crowd-rallying fight by Jamie Devane in the first three minutes of regulation, the Phantoms pulled away with four-straight tallies. The Penguins made things interesting late with Myles Powell’s first AHL goal and a tally by Jan Drozg, but Lehigh Valley had built enough cushion for the win.

Wednesday, Feb. 12 – PENGUINS vs. Hartford
Wilkes-Barre/Scranton and Hartford will face-off for only the second time this season, but the first at XL Center. The Pens shut-out the Wolf Pack, 3-0, in their only head-to-head this season. However, Hartford has a staggering 20-1-0-2 home record, tops in the AHL.

Friday, Feb. 14 – PENGUINS vs. Providence
Wilkes-Barre/Scranton makes its first visit to Dunkin’ Donuts Center for a tilt with Providence. The Penguins trail the Bruins by only two points for third place in the Atlantic Division, and Providence has only won four of its last 10 games.

Saturday, Feb. 15 – PENGUINS vs. Bridgeport
The Pens battle the Sound Tigers for the fifth time, with both teams boasting identical 2-1-0-1 records against one another this season. Bridgeport ranks last in goals for per game and has scored 17 times in its last nine games (1.89 per game).

– In previous years, Wilkes-Barre/Scranton is 3-1-0-0 on its Dads’ Trip, with someone recording a hat trick in each of those three wins. 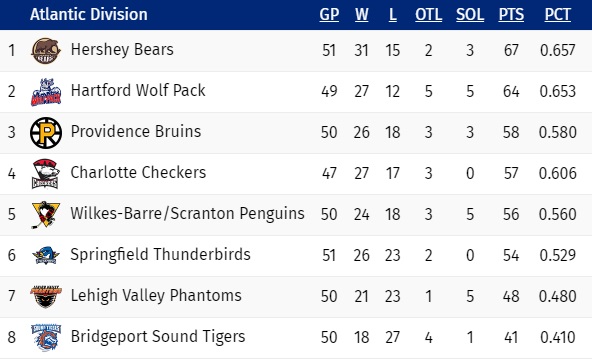 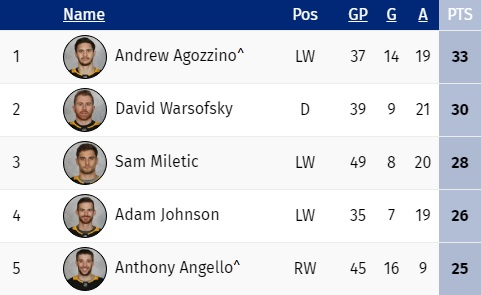