In the Penguins’ first visit to Dunkin’ Donuts Center this season, the Bruins earned the edge by using pairs of goals in the first and third periods. Jordy Bellerive returned from a four-game injury absence and scored with 0.8 seconds left in regulation.

Bridgeport’s Simon Holmström potted back-to-back goals to lift the Sound Tigers over the Penguins on Saturday. Jamie Devane scored to get things started for Wilkes-Barre/Scranton in the middle frame, followed by a power-play goal by Joseph Blandisi.

Wilkes-Barre/Scranton returns home to take on the Hershey Bears for an Eyewitness News Fan Friday. The Bears have ascended to first place in the Atlantic after going 7-2-1-0 in their last 10 games.

The Penguins can stun the Wolf Pack at XL Center for the second time this month. Casey DeSmith has stopped 50 of the 51 shots he’s seen in two games against Hartford this season.

A huge, four-point swing will be available when Wilkes-Barre/ Scranton looks for revenge against Providence at Dunkin’ Donuts Center. The Bruins currently have a six-point advantage on the Penguins in the Atlantic Standings.

– Jon Lizotte tops all rookie defensemen with a plus-17 rating.

– The Penguins have played in nine shootouts this season, tied for most in the AHL.

– P.O Joseph’s pair of goals on Wednesday marked his first two-goal game as a pro. 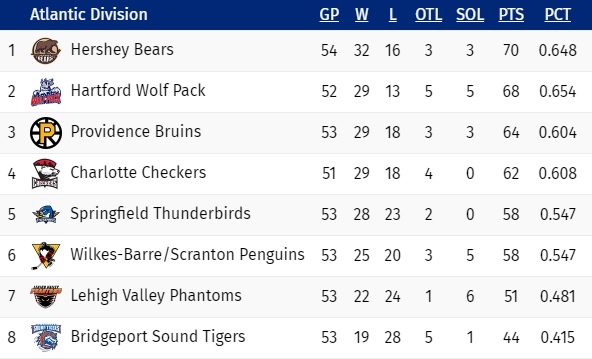 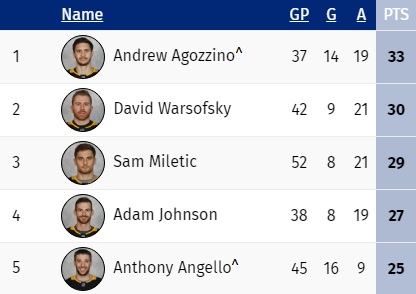 FORMER PENS REUNITE AT GOAL IN ONE GOLF CLASSIC