Penguins to play with purpose when they return home Saturday, Sunday

Wednesday, Feb. 26 – PENGUINS 2 vs. Providence 6
Riley Barber scored his first goal with Wilkes-Barre/Scranton in the second period, but Providence’s offense proved to be too much, scoring three times in the middle frame and twice in the third.

Friday, Feb. 28 – PENGUINS 3 at Syracuse 4
Phil Varone notched two assists in his Penguins debut while Barber and Cole Cassels both posted a goal and an assist. However, a hat trick by Syracuse’s Alex-Barré-Boulet catapulted the Crunch to victory.

Saturday, Feb. 29 – PENGUINS 1 at Hershey 5
Despite receiving nine power plays over the course of the game, Wilkes-Barre/Scranton never got the upper-hand on a reinforced Hershey side. David Warsofsky scored the Penguins’ lone goal, his seventh power-play goal of the year.

Friday, Mar. 6 – PENGUINS at Binghamton
Wilkes-Barre/Scranton returns to Floyd L. Maines Veterans Memorial Arena for the first time since Oct. 23, but a lot has changed for Binghamton since then. The Devils are 23-9-0-0 since Dec. 14.

Saturday, Mar. 7 – PENGUINS vs. Bridgeport
The Penguins and Sound Tigers face-off for the last time this year. Bridgeport has beaten Wilkes-Barre/Scranton three games in a row, but has scored the fewest goals in the AHL (134).

Sunday, Mar. 8 – PENGUINS vs. Binghamton
The Penguins dance with the Devils for the second time in the same weekend, but this time, they get to do it on their home ice. Wilkes-Barre/Scranton has never lost to the Binghamton Devils at home in franchise history (7-0-0-0).

– Since joining Wilkes-Barre/Scranton, Riley Barber has five points (2G-3A) in six games, and Phil Varone has three points (3A) in two games. 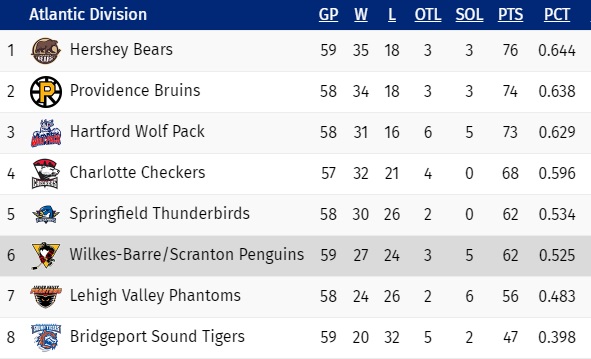 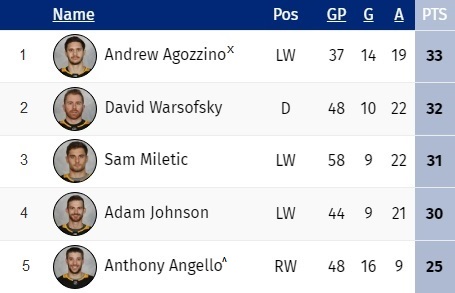 WHILE SEASON IS ON HOLD, VELLUCCI CONTINUES TO COACH