Friday, Mar. 6 – PENGUINS 4 at Binghamton 6
Jordy Bellerive (2G), Cole Cassels (2A), Adam Johnson (1G-1A), P.O Joseph (2A) and Kevin Roy (1G-1A) all put forth multi-point performances, but it was all for not as the Devils built a big enough cushion to survive the Penguins’ comeback bid.

Saturday, Mar. 7 – PENGUINS 5 vs. Bridgeport 2
Wilkes-Barre/Scranton received goals from five different players spread across all three periods to dispatch of the Sound Tigers in decisive fashion. Chase Berger scored his first goal of the season late in the third period.

Sunday, Mar. 8 – PENGUINS 0 vs. Binghamton 3
The Penguins suffered a 27-save shutout at the hands of Zane McIntyre, as the Devils recorded their first-ever win at Mohegan Sun Arena at Casey Plaza in franchise history.

Wednesday, Mar. 11 – PENGUINS at Lehigh Valley
Wilkes-Barre/Scranton returns to Allentown for the first time since Nov. 29 to kick off its Keystone State Rivalry week. Wednesday will also serve as Phil Varone’s first game against his former team. Varone won the AHL’s Most Valuable Player award as a member of the Phantoms in 2017-18.

Friday, Mar. 13 – PENGUINS at Lehigh Valley
The Penguins head right back to PPL Center for a Friday night rematch with the Phantoms. Home teams have largely had the edge in the season series, with both clubs failing to win on home ice only once so far.

Saturday, Mar. 14 – PENGUINS at Hershey
The Penguins finish their week full of in-state foes with their last visit to Giant Center this season. The Bears’ Mike Sgarbossa leads the season series with nine points (3G-6A) in seven games.

– Wilkes-Barre/Scranton has scored on seven of its last 28 power plays, a success rate of 25 percent.

– David Warsofsky is tied for the league-lead among all AHL defensemen with seven power-play goals.

– With two assists on Friday, Cole Cassels tied his career high with 26 points. He did it in 20 games fewer than his previous 26-point season in 2017-18 with Utica.

– The Penguins currently have a three-way tie for most assists on the team, as Warsofsky, Sam Miletic and Adam Johnson all have 23 helpers on the year. 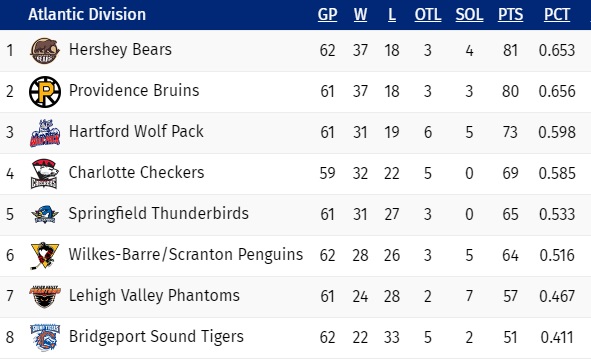 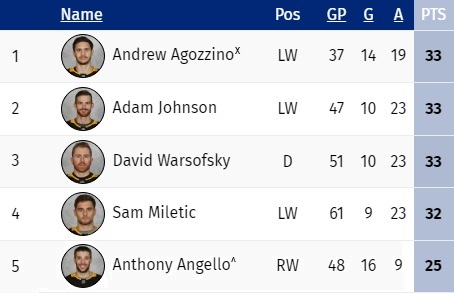