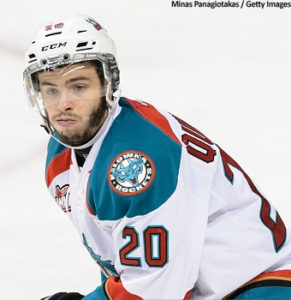 Coaches always preach about the opportunities afforded to players in a training camp situation. Of course, many players with certain contracts or past performance credentials often have an edge before the first puck even drops.  But it’s supposed to always be a matter of playing the best you can so that you’re impossible to ignore.

Gage Quinney has made himself impossible to ignore.

An overage standout who played major junior hockey in the Western Hockey League last year, Quinney first played for the Penguins organization as an undrafted free agent on a tryout agreement at this year’s rookie tournament in London. He got the call from Pittsburgh just two weeks before the event, and has done nothing but impress ever since.

His strong play in London earned him an invite to Pittsburgh’s main training camp, something he didn’t really consider possible when he agreed to join the club in its annual rookie excursion.

“I had no idea, actually,” Quinney said of making Pittsburgh’s camp. “It was just originally that I was going to the prospect camp. That was the only thing on my mind. Now, look. Here I am.”

Quinney was eventually reassigned from Pittsburgh’s camp to Wilkes-Barre/Scranton where he has really shone. Penguins head coach Clark Donatelli cited Quinney early on as one of the new guys in the room that opened his eyes, and today Quinney skated with a veteran-laden group at the Toyota SportsPlex at Coal St.

“[Quinney]’s learned to play with pace, which is big for us,” Donatelli said. “He’s an excellent puck handler. He put up a ton of points in junior… He seems to get it done. What can I say?”

The Las Vegas, Nev. product agrees with Donatelli’s assessment on skill being his strong suit, but added to his scouting report with a bit of criticism and a self-assigned challenge.

“I’m a skilled player, so I play to that,” Quinney said. “That’s what I like to do, but I see some things that I still need to work on. I need to get stronger to win those battles for pucks or positioning. Instead of being 50/50 in the battles, I want to win every battle.”

Winning “every battle” is a lofty goal for any player, but then again, so is earning a professional hockey contract as an undrafted 21-year-old on a tryout. So far, Quinney has put his best foot forward in terms of accomplishing that second feat.

His work isn’t done yet, though. Now, Quinney has to continue to build on his hard work and show what he’s capable of in game situations now that Wilkes-Barre/Scranton’s exhibition schedule is set to begin tomorrow.

“I want to see what it’s like and get a taste for the pro game,” Quinney said. “Then I want to adapt as fast as I can and then go from there. Hopefully, I can keep it up.”