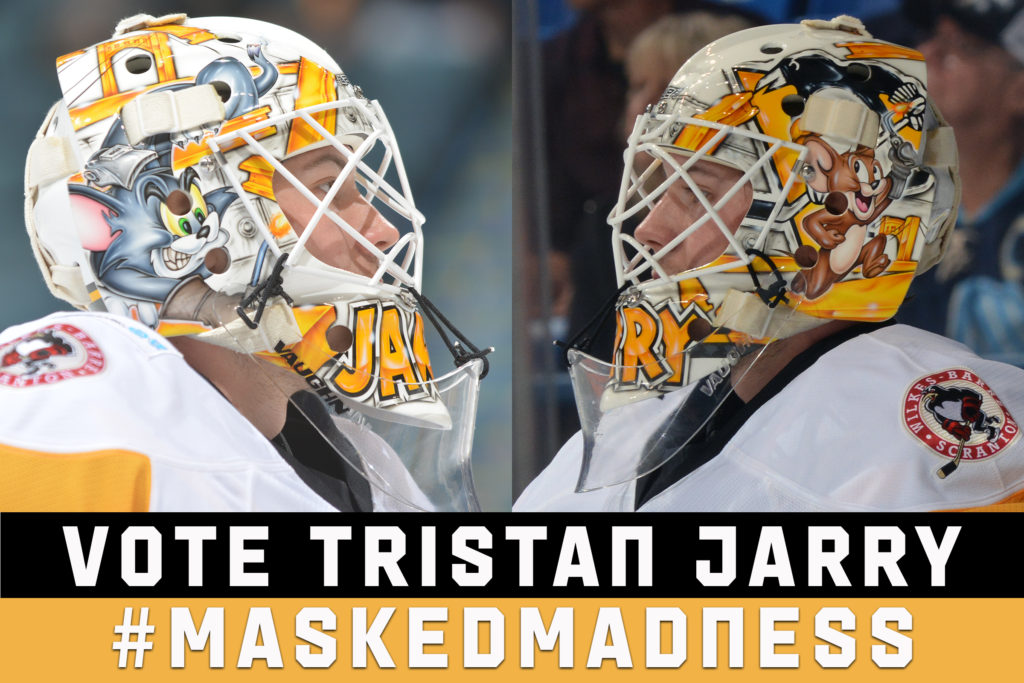 The presidential election is already decided, but there’s another vote going on right now that involves every Wilkes-Barre/Scranton Penguins fan – the American Hockey League’s #MaskedMadness contest!
Penguins goaltender Tristan Jarry is one of six finalists in the contest, after Penguins fans pushed him into the championship round by defeating five other netminding foes in the preliminary round.
Jerry’s mask features the dynamic duo of Tom and Jerry (Tom and Jarry?!?!) as well as the Pittsburgh Penguins logo on one side, representations of Pittsburgh’s famous yellow “Three Sisters” bridges, and his last name across the chin.
Voting is going on now at ahl social ambassadors. In addition to feeling good about performing your civic duty, five lucky voters will receive AHL prize packs at the conclusion of the contest.  For more info, visit theahl.com.
The Wilkes-Barre/Scranton Penguins are back on home ice this Friday night when they host the Bridgeport Sound Tigers at 7:05pm.  Good seats are available at the Mohegan Sun Arena box office, online at TicketMaster.com or by calling 570-208-7367.
Tags: AHL, American Hockey League, Goalie, Goaltender, Hockey, Mask, MaskedMadness, National Hockey League, NHL, Pittsburgh Penguins, Tristan Jarry, Wilkes-Barre/Scranton Penguins

DESPITE BARRAGE OF SHOTS, PENGUINS FOILED BY PHANTOMS, 4-3