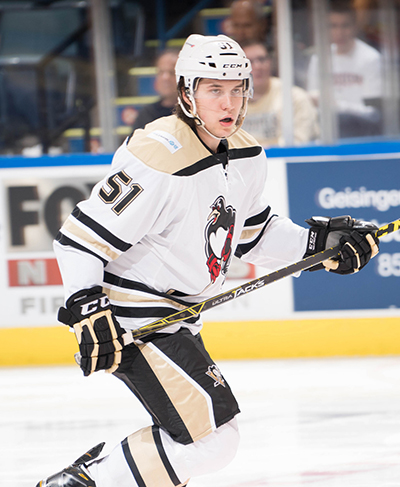 The Pittsburgh Penguins have assigned defenseman Derrick Pouliot to the Wilkes-Barre/Scranton Penguins of the American Hockey League on a conditioning assignment, it was announced today by executive vice president and general manager Jim Rutherford.

Pouliot, who was injured in his only NHL appearance of the season on Oct. 20 versus San Jose, will play three games for WBS this weekend, then he will be re-evaluated by the Penguins’ team doctors when he returns.

The Penguins’ next game is Wednesday, Nov. 23, when they travel to Giant Center to take on the Hershey Bears. Wilkes-Barre/Scranton’s next home game is Saturday, Nov. 26, against the Bridgeport Sound Tigers. Individual game tickets for next Saturday night’s game and all Penguins home games, are available at the Mohegan Sun Arena box office, online at TicketMaster.com, or by calling 800-745-3000.