GOODBYE TO ‘THE ROCK’ 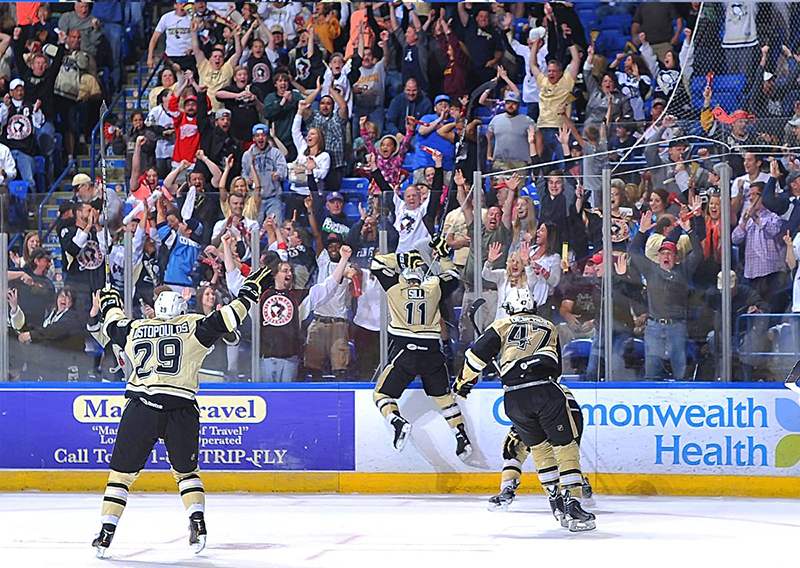 The Wilkes-Barre/Scranton Penguins travel to Newfoundland for a pair of games against the St. John’s IceCaps this Saturday and Sunday and, barring a meeting in the Eastern Conference Finals, this will be the Pens’ final trip to ‘The Rock’.  The Ice Caps, the AHL affiliate of the Montreal Canadiens, are slated to relocate to Laval, Quebec next season, where they will be rechristened the Rocket.

The Penguins and IceCaps have forged a solid, if infrequent, rivalry since St. John’s reentered the league in 2011-12.  Wilkes-Barre/Scranton has dominated the regular season schedule, posting a 16-4-0-0 mark (including a 9-1-0-0 record at the Mile One Centre), while the IceCaps have recorded a pair of post-season series victories (2012, 2014).

As we prepare to take to the ice in the Maritimes one last time, here’s a look back at the highlights from the all-time series between the Penguins and IceCaps.

JANUARY 14, 2012:  The first ever meeting between the clubs saw a combined 10 goals, as the Penguins posted a 6-4 win in Newfoundland.  Bryan Lerg led the way with three points (2+1) for the Penguins, while captain Ryan Craig recorded a pair of goals himself.  Ben Street scored on a second period penalty shot against David Aebischer, while Brad Thiessen stopped an attempt by Carl Klingberg in the third period.  Street’s goal was one of three shorthanded tallies in the game by the Penguins.

JANUARY 15, 2012:  Ben Street scored 1:33 into overtime to give the Penguins a 4-3 win.  Bryan Lerg netted his second shorthanded goal in as many games.

MAY 8, 2012:  Simon Despres scored 12:08 into the second overtime, giving the Penguins a 3-2 win in Game Five of the Eastern Conference Semifinals in Wilkes-Barre.  The victory extended the series and sent the team’s back to St. John’s for Game Six.  The Pens would win that contest, 4-2, and force a Game Seven, in which the IceCaps prevailed.

APRIL 13, 2013:  Jeff Zatkoff matched Thiessen’s earlier effort, stopping 18 shots for another 3-0 shutout, this one taking place in St. John’s.  Dominik Her recorded a pair of goals for Wilkes-Barre/Scranton, and Bobby Farnham (also a current St. John’s skater) picked up a pair of assists.

NOVEMBER 23, 2013:  Five different Penguins posted third period goals as the home team posted a 5-2 win.  Tom Kostopoulos and Bobby Farnham each had a goal and an assist in the game.

MAY 31, 2014:  One of the most famous goals in recent Penguins history.  Zach Sill scored with 16 seconds remaining in regulation to give the Penguins the lead in what would go on to be a 4-2 victory in Game Five of the Eastern Conference Final in Wilkes-Barre.  Chuck Kobasew tied the game at 2-2 with 7:30 left in the third – on what has simply become know as ‘The Shift’ in Penguins lore – and his empty net goal with seven seconds to play lit fireworks which saw 11 players handed misconduct penalties.  The win forced a Game Six in St. John’s, which the IceCaps won, 5-0, giving the team it’s first trip to the Calder Cup Final.

NOVEMBER 29, 2014:  Matt Murray stopped 22 shots for his second shutout of the season, and Jean-Sebastien Dea recorded the lone goal as the Pens posted a 1-0 win in NEPA.