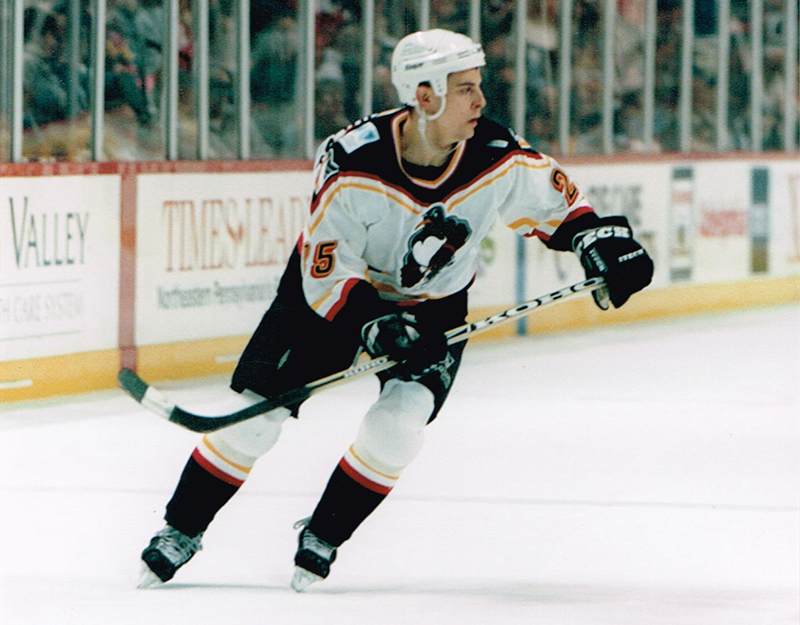 Tom Kostopoulos has played in a lot of cities during his pro hockey career.  But the first of those towns to see his skates hit the ice was St. John’s, Newfoundland.

TK made his Wilkes-Barre/Scranton Penguins debut in the team’s fifth ever game (he missed the first four due to a contract stalemate), which took place on October 12, 1999 against the St. John’s Maple Leafs at Memorial Stadium.  The Penguins dropped a 3-2 decision to the Maple Leafs that day, and Kostopoulos went scoreless with an even rating and one shot in the defeat.

The next day saw Kostopoulos post another first for his career, while he helped give the franchise a first of its own as well.

The Penguins entered the third period trailing the Maple Leafs, 2-0, before Greg Crozier scored to cut the deficit in half.  Then, with just 3:18 seconds left, Kostopoulos picked up his first career goal by beating net minder Jimmy Waite to tie the game at 2-2.  Martin Sonnenberg was awarded the lone assist.

The game ended in a tie, giving the Penguins their first point in the standings in team history.  Craig Hillier was in net for Wilkes-Barre/Scranton, and stopped 31 shots on the night.

Kostopoulos ended the night with one goal on two shots and a plus-2 rating for the visitors.

The Penguins face off with the IceCaps on Saturday and Sunday at 2:30pm Eastern Time, in what could be the Pens’ final two games in St. John’s.  The IceCaps will relocate to Laval, Quebec next season.  You can follow the action between the Penguins and IceCaps by listening online via WILK News Radio, or watching on AHLLive.com.