WILKES-BARRE, Pa. – Oskar Sundqvist tied the Wilkes-Barre/Scranton Penguins franchise record for most goals in a single game, tallying four in a 6-2, come-from-behind win over the Hershey Bears at the Mohegan Sun Arena on Saturday night.

Sundqvist became the third Penguins skater to tally four goals in a game, matching the mark previously set by Erik Christensen (October 5, 2005 vs. Bridgeport) and  Jean-Francois Jacques (February 16, 2007 vs. Binghamton).

Similar to Friday night’s contest, the Bears jumped out to a 2-0 lead in the first period behind goals from Christen Djoos and Chandler Stephenson.

Sundqvist pulled one back for the Pens and tallied his first of the four with three minutes left in the opening frame.

Wilkes-Barre/Scranton took advantage of Hershey’s untimely line-change halfway through the second, allowing Sundqvist to net his second of the night tying the contest. 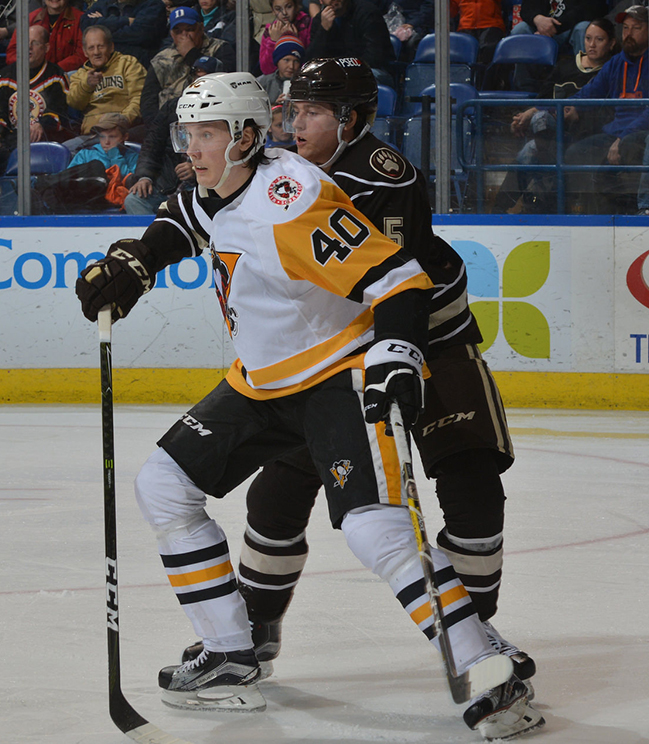 Jake Guentzel followed up Sundqvist’s effort with a goal of his own – his second on the weekend –  just 29 seconds later to give the Penguins the 3-2 lead.

Sundqvist completed his hat trick at the 12:27 mark of the second, deflecting Kevin Porter’s shot from the slot to increase the Penguins lead to 4-2.
His impressive play continued into the start of the final frame, scoring his fourth of the contest at the 3:36 mark.

Tom Kostopoulos added the sixth and final goal late in the third for his seventh goal of the season.

Casey DeSmith had a perfect final two periods, and saved 21 of 23 shots he faced overall.  Joe Cannata stopped 30 of the 36 shots that came his way.

The Penguins’ next game is Sunday afternoon, when they face off with the Bridgeport Sound Tigers in Connecticut. Puck drop is scheduled for 5:00 p.m.

Wilkes-Barre/Scranton’s next home game is Friday, December 16 where they host the Rochester Americans. Puck drop for that contest is scheduled for 7:05 p.m. Penguins ticket packages, including 22-game, 12-game, and 10-voucher flex packs, are available directly through the Penguins offices by calling (570) 208-7367.