Oskar Sundqvist joined some elite company on Saturday night, becoming just the third Wilkes-Barre/Scranton Penguins player to record four goals in a game. But Sundqvist’s hat trick plus one came under different circumstances than the first two times the feat was accomplished. 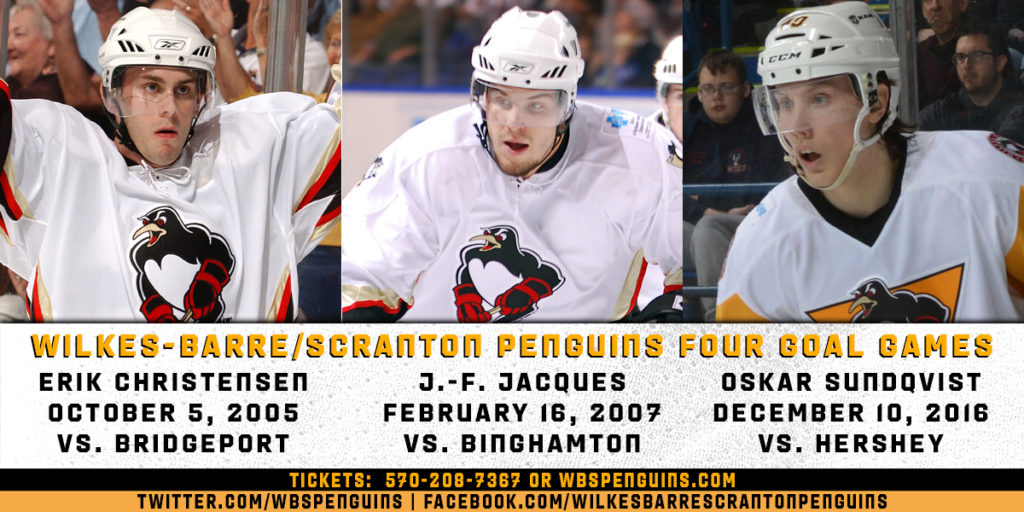 OCTOBER 5, 2005 – Erik Christensen wasted no time in opening his scoring account, picking up four goals and leading the Penguins to an 8-1 win in the season opener against the Bridgeport Sound Tigers.

This outcome of the game was never in doubt, as Matt Hussey opened the scoring at 2:58 of the first frame, before Christensen got on a roll. The second-year pro recorded the next two Pens goals, and completed the hat trick before the game was halfway over. He topped things off with his fourth of the night at 13:36 of the third period to finish off the night’s scoring.

Christensen’s first three tallies came against Wade Dubielewicz, who was eventually chased from the game following Tomas Surovy’s second goal of the game – the Penguins’ sixth of the night – at 8:11 of the second period. Chris Madden was victimized for Christensen’s record-setting goal.

Christensen went on to record 20 more goals for Wilkes-Barre/Scranton during the season, and finished second on the team with 46 points (24+22) in just 48 regular season games. He also saw significant playing time with the Pittsburgh Penguins that season, recording 13 points (6+7) in 33 games with the NHL club.

A dangerous force in shootouts (he’s tied for first on the team’s all-time list with 11 successful attempts), Christensen recorded 50 goals and 97 points in 141 games with Wilkes-Barre/Scranton during parts of three seasons. He appeared in 387 NHL games with Pittsburgh, Atlanta, Anaheim, the New York Rangers and Minnesota Wild, posting 163 points (68+95). He has spent the past five seasons playing in Europe, and is currently tied for the team lead with 10 goals for HV71 Jonkoping in Sweden (as of December 12, 2016).

FEBRUARY 16, 2007 – Jean-Francois Jacques didn’t need to score four goals against the Binghamton Senators to secure a win. His tally 1:58 into the game provided all the offense the team would need thanks to a 17-save performance by Jeff Drouin-Deslauriers. But the Edmonton Oilers prospect tacked on three more goals en route to a 7-0 shutout of the I-81 rivals.

Jacques spaced out his first two goals, scoring his second with just 18 ticks left in the second period to put the Penguins up 3-0 (Rob Schremp had a goal sandwiched between the two scores). He completed his hat trick 23 seconds into the third period, then finished off his four-goal performance with 6:14 to play in the game.

Dan Carcillo and Jonathan Filewich also netted goals in the game against Jeff Glass, who stopped 31 of 38 shots he saw.

Jacques added just one more goal in nine further games with the club after his big night, and finished the Wilkes-Barre/Scranton portion of his career with 27 points (10+17) in 29 total games.

The Montreal native appeared in 309 AHL games with the six teams between 2005 and 2014, recording 187 points (89+98). He also suited up in 166 games with Edmonton and Anaheim in the NHL, posting 17 points (9+8). Like Christensen, Jacques is also currently plying his trade overseas, and has appeared in all 27 of Ingolstadt ERC’s games in Germany this season.

DECEMBER 10, 2016 – While the first two four-goal games came in Penguins blowouts, the third featured the hat trick hero providing a much needed spark.

The Hershey Bears jumped out a 2-0 lead 12:11 into the game. It looked like the Bears, who posted a 5-2 victory on the same ice the night before, were steering this game in a similar direction.

But that’s when Sundqvist changed things.

The second-year pro picked up a loose puck in the slot and waisted home his eighth goal of the season at 16:59 of the first, tying the team lead for goals in the process.

His second goal came almost midway through the game off of a Josh Archibald rebound, and tied the contest at 2-2.

Jake Guentzel followed that goal up with his ninth of the season 29 seconds later, giving the Penguins their first regular season lead against the Bears in five contests this season.

Sundqvist redirected a Kevin Porter shot for his third of the game just two and a half minutes later, and picked up his fourth goal in style with a breakaway tally early in the third period.

The Swedish sniper may have led the scoring attack but, unlike Christensen and Jacques, Sundqvist did not record the game-winning goal in the 6-2 victory (that was credited to Guentzel). But it’s safe to say that the Penguins wouldn’t have picked up the win without his record-tying effort.