HARTFORD, CT – Kevin Porter and Tom Sestito each recorded a goal and an assist, and Dominik Simon picked up four helpers, as the Wilkes-Barre/Scranton Penguins posted a 6-2 win over the Hartford Wolf Pack at the XL Center on Wednesday night.

Garrett Wilson notched the lone goal of the opening frame at 13:26 and the 1-0 lead held until the 9:34 mark of the second period.  Nicklas Jensen, who was reassigned from the New York Rangers earlier in the day, put home his team-leading ninth tally to tie the score at 1-1.

The deadlock was short-lived, however, as Kevin Porter came in from the far boards and beat netminder Magnus Hellberg glove side just 16 seconds later.

Porter’s goal was the first of four straight for the Penguins.  Cameron Gaunce tallied his first in a Wilkes-Barre/Scranton uniform (the eventual game-winner) with 29 seconds left in the second period 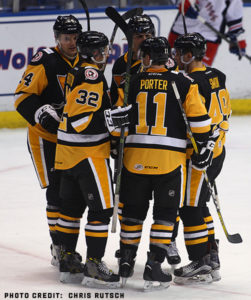 , and Ryan Haggerty took a feed from Sestito at the far post two and a half minutes into the third to make it a 4-1 advantage.

Tom Kostopoulos extended the Penguins streak of games with a power play goal to seven at the 14:37 mark, before Chris Summers found the back of the net for his first of the season with the Wolf Pack.

Sestito padded the Pens advantage with a second man-advantage marker with just 26 seconds left in the game.

Tristan Jarry picked up his 11th win of the season with a 31 save performance, while Hellberg turned aside 27 shots in defeat.

The Penguins’ are back on home ice this Friday, December 16 as they face-off against the Rochester Americans for the first and only time at Mohegan Sun Arena at Casey Plaza this season. The contest is also an Eyewitness News Fan Friday, with $14 lower bowl tickets, select draft beers for just $2 from 6:00-7:30 p.m., and a post-game autograph session with two Penguins players.

NOTES:  The game was Tom Sestito’s 300th in the AHL…Jake Guentzel was held scoreless in the game, snapping a three-game scoring streak which saw him tally a goal and an assist in each contest…The Penguins are 11-for-28 (39.3%) on the power play over their past seven games…Simon has nine points (1+8) over the past six games…Wilson’s goal gives him points in three straight games (1+3=4)…David Warsofsky had his five-game scoring streak snapped.