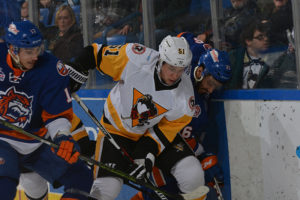 The Pittsburgh Penguins have recalled defenseman Derrick Pouliot from Wilkes-Barre/Scranton of the American Hockey League, it was announced today by executive vice president and general manager Jim Rutherford.

Pouliot has played in seven games this year with Wilkes-Barre/Scranton, helping the club move into first place in the AHL’s overall standings.