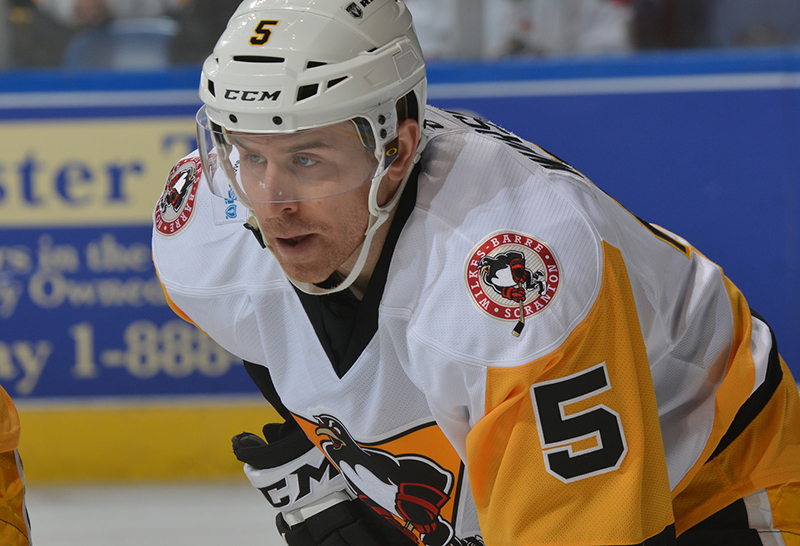 The Pittsburgh Penguins have recalled defenseman David Warsofsky from the Wilkes-Barre/Scranton Penguins, it was announced on Wednesday.

Warsofsky, 26, leads Wilkes-Barre/Scranton defensemen with 21 points (5+16) in 20 games with the club this season, ranks tied for sixth among all AHL blueliners in points, and tied for fifth with 16 assists.  His plus-16 rating is tied for fourth in the league, trailing only teammates Jake Guentzel (plus-19), Garrett Wilson (plus-18) and Oskar Sundqvist (plus-17)

In 10 games with Wilkes-Barre/Scranton during the month of December, Warsofsky has recorded 15 points (3+12), which includes a three assist effort in Tuesday night’s win over the Springfield Thunderbirds.  He has points in nine of the Penguins 10 games during the month.

Warsofsky has appeared in 37 games with Wilkes-Barre/Scranton over parts of two seasons, recording 27 points (7+20) and a plus-18 rating.

The Marshfield, MA native appeared in four games with Pittsburgh earlier this year, going scoreless. He has one goal and two penalty minutes in 12 games with the NHL Penguins during the past two seasons.

The Wilkes-Barre/Scranton Penguins are back in action on Friday night, when they host the Providence Bruins in the final home game os 2016.  It’s an Eyewitness News Fan Friday, with $14 lower bowl seats (while supplies last), select draft beers for $2 from 6-7:30pm and postgame autographs from a pair of Penguins players.  Plus, the first 5,000 fans in the arena will receive a Penguins Cell Phone Wallet.

Tickets for Eyewitness News Fan Friday are available at the Mohegan Sun Arena Box Office, throughout he Penguins front office (40 Coal Street) or by calling 570-208-7367.

Individual game tickets all Penguins home games, are available at the Mohegan Sun Arena box office, online at TicketMaster.com, or by calling 800-745-3000.