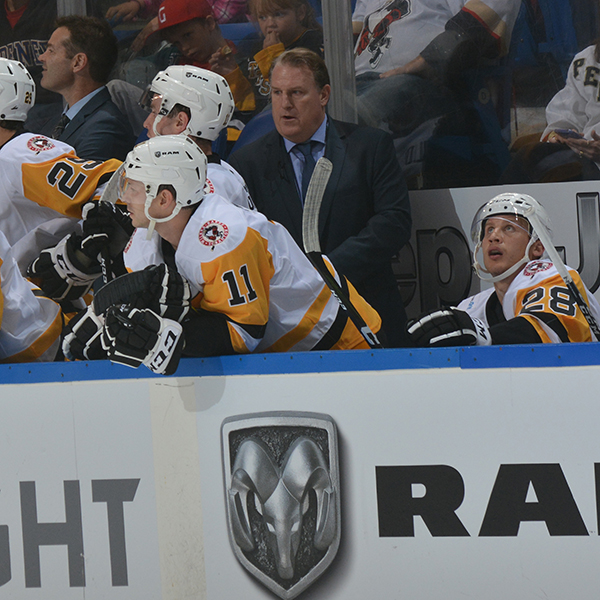 SPRINGFIELD, Mass. … The American Hockey League announced today that Clark Donatelli of the Wilkes-Barre/Scranton Penguins, Benoit Groulx of the Syracuse Crunch, Todd Nelson of the Grand Rapids Griffins and Mike Stothers of the Ontario Reign have clinched the honor of coaching at the 2017 AHL All-Star Classic presented by Capital BlueCross, to be held January 29-30 at the PPL Center in Allentown, Pa., home of the Lehigh Valley Phantoms.

The Penguins, Crunch, Griffins and Reign all owned the best record in their respective divisions as of the pre-determined deadline: the end of play on Dec. 31.

The AHL’s All-Stars will be divided into four teams, one representing each of the league’s four divisions, for the 2017 AHL All-Star Challenge on Jan. 30. The teams will participate in a round-robin tournament featuring six games of 10 minutes each, played entirely at 3-on-3. The two teams with the best records at the end of the round-robin will face off for the championship, a six-minute game also played at 3-on-3.

Clark Donatelli will coach the Atlantic Division All-Star team after guiding Wilkes-Barre/Scranton to the best record in the AHL over the first three months of the season. Donatelli, who was named head coach of the Penguins on Dec. 22, 2015, following Mike Sullivan’s promotion to Pittsburgh, has led Wilkes-Barre to a 21-7-3-0 mark (.726) this year and is overseeing the league’s top-ranked defense (2.26 goals against per game) and second-best penalty kill (86.4 percent).

Donatelli joins a long list of Penguins coaches to participate in the AHL All-Star festivities.  Joe Mullen guided the PlanetUSA All-Stars at the 2006 game in Winnipeg (along with Penguins assistant coach Al Sims); Todd Richards (assisted by Dan Bylsma) handled head coaching duties with PlanetUSA at the 2007 game in Toronto; John Hynes co-coached the West All-Stars at the 2011 contest in Hershey; and Jay Leach represented the Penguins at the 2016 game in Syracuse.

Benoit Groulx will coach the North Division team as the Crunch currently own a record of 18-9-0-4 (.645). In his first campaign with the Crunch, Groulx has successfully juggled a roster that has already seen 13 different players recalled by the parent Tampa Bay Lightning this season.

Todd Nelson has Grand Rapids in first place with a mark of 20-8-1-2 (.694) and will guide the Central Division All-Stars. Nelson, in his second season with the Griffins and seventh as an AHL head coach, previously coached in the AHL All-Star Classic in 2012 and won Calder Cups as an assistant with the Chicago Wolves in 2008 and as a player with the Portland Pirates in 1994.

Mike Stothers will make his unprecedented third consecutive appearance and fifth overall behind an All-Star bench, guiding the Pacific Division team thanks to a 17-6-5-0 record (.696) with the Ontario Reign. A Calder Cup champion as a player, assistant coach and head coach in his career, Stothers was an assistant coach at the 1998 and 1999 All-Star events before serving as a head coach in 2015 and 2016.

Playing rosters for the 2017 AHL All-Star Classic presented by Capital BlueCross will be announced later this week.

In operation since 1936, the American Hockey League continues to serve as the top development league for the players, coaches, managers, trainers, executives and broadcasters of all 30 National Hockey League teams. More than 88 percent of NHL players last season were AHL graduates, and more than 100 honored members of the Hockey Hall of Fame spent time in the AHL in their careers. In 2015-16, over 7.1 million fans attended AHL regular-season and playoff games across North America, the highest total attendance in league history.