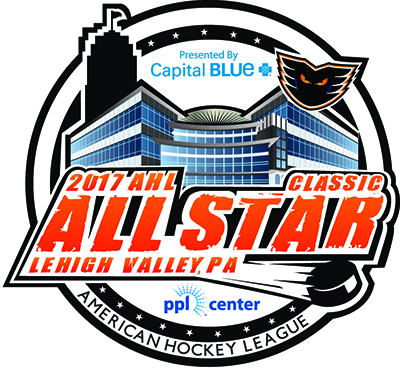 SPRINGFIELD, Mass. … The American Hockey League announced today the playing rosters for the 2017 AHL All-Star Classic presented by Capital BlueCross, to be held January 29-30 at the PPL Center in Allentown, Pa., home of the Lehigh Valley Phantoms.

Each of the AHL’s four divisions will be represented by 12 players. Rosters (click here to view rosters) were determined by committees of AHL coaches, and all 30 AHL teams are represented by at least one All-Star.

The 2017 rosters feature 37 first-time AHL All-Stars, 12 rookies and seven former first-round draft choices. In addition, 27 of the All-Stars named have been recalled to the National Hockey League already this season, including standouts Jake Guentzel of the Wilkes-Barre/Scranton Penguins (Pittsburgh), Zane McIntyre of the Providence Bruins (Boston), Juuse Saros of the Milwaukee Admirals (Nashville) and Brendan Perlini of the Tucson Roadruners (Arizona).

In the 2017 AHL All-Star Challenge on Jan. 30 (7 p.m. ET), the four teams will participate in a round-robin tournament featuring six games of 10 minutes each, played entirely at 3-on-3. The two teams with the best records at the end of the round-robin will face off for the championship, a six-minute game also played at 3-on-3.

Starting at just $26 each, single-event tickets are now on sale for the 2017 AHL All-Star Classic presented by Capital BlueCross, featuring the AHL All-Star Skills Competition presented by Giant Food Stores and Velaspan and the AHL All-Star Challenge. To purchase event tickets, please visit phantomshockey.com, call 610-347-TIXX or visit the PPL Center box office. The 2017 AHL All-Star Classic presented by Capital BlueCross will be preceded by a Phan Fest on Saturday, Jan. 28 from 11 a.m. to 3 p.m., followed by a Tailgate Party beginning at 6 p.m. Both events will take place at the PPL Center and tickets for both the Phan Fest ($5) and Tailgate Party ($10) are also available now at phantomshockey.com.

The 2017 AHL All-Star Classic presented by Capital BlueCross will feature the top young talent in the American Hockey League: since 1995, more than 93 percent of All-Star Classic participants have gone on to compete in the National Hockey League, including Jake Allen, Artem Anisimov, Patrice Bergeron, Ben Bishop, Troy Brouwer, Ryan Callahan,

In operation since 1936, the American Hockey League continues to serve as the top development league for the players, coaches, managers, trainers, executives and broadcasters of all 30 National Hockey League teams. More than 88 percent of NHL players last season were AHL graduates, and more than 100 honored members of the Hockey Hall of Fame spent time in the AHL in their careers. In 2015-16, over 7.1 million fans attended AHL regular-season and playoff games across North America, the highest total attendance in league history.