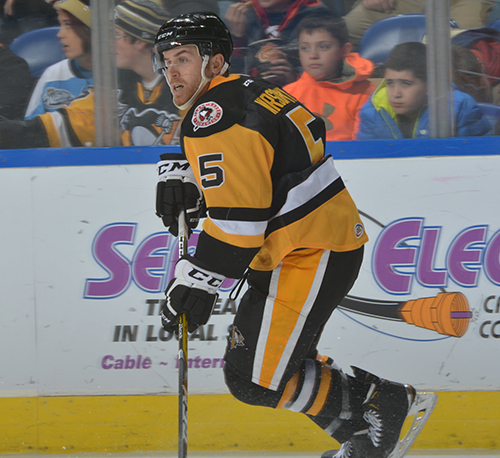 SPRINGFIELD, Mass. … The American Hockey League announced today that Wilkes-Barre/Scranton Penguins defenseman David Warsofsky has been selected as the CCM/AHL Player of the Week for the period ending Jan. 8, 2017.

On Tuesday evening, Warsofsky tallied an assist as Wilkes-Barre/Scranton edged Hartford, 3-2. On Friday, he registered two helpers, a plus-4 and a game-high five shots on goal as the Penguins beat Hershey, 5-1.  He picked up two more assists in a 5-4 win over Binghamton on Saturday. Finally, on Sunday, Warsofsky scored twice – including the overtime winner – and fired eight shots on goal, earning first-star honors in a 6-5 victory at Hershey.

A sixth-year pro from Marshfield, Mass., Warsofsky has already established a career high in goals (7), and has 21 assists for 28 points in 24 games for Wilkes-Barre/Scranton. He ranks sixth among AHL defensemen in points and tied for third in assists.  He also leads the AHL in plus/minus (+22) and carries an eight-game scoring streak (4+11=15) into the new week.

Originally a fourth-round draft pick by St. Louis in 2008, Warsofsky has skated in 271 career AHL games with Wilkes-Barre and Providence, totaling 27 goals and 102 assists for 129 points. He has also posted two goals and three assists in 26 NHL contests with Pittsburgh and Boston, appearing in four games for the parent Penguins this season.

In recognition of his achievement, Warsofsky will be presented with an etched crystal award prior to an upcoming Penguins home game.

The Penguins continue their season-long seven-game road trip this week with games against the Toronto Marlies (Wednesday, January 11), the Rochester Americans (Friday, January 13) and the Syracuse Crunch (Saturday, January 14).

Wilkes-Barre/Scranton’s next home game takes place on Saturday, January 21, when they host the Hershey Bears at 7:05pm.   Individual game tickets for the game on Jan. 21 and all Penguins home games, are available at the Mohegan Sun Arena box office, online at TicketMaster.com, or by calling 800-745-3000.