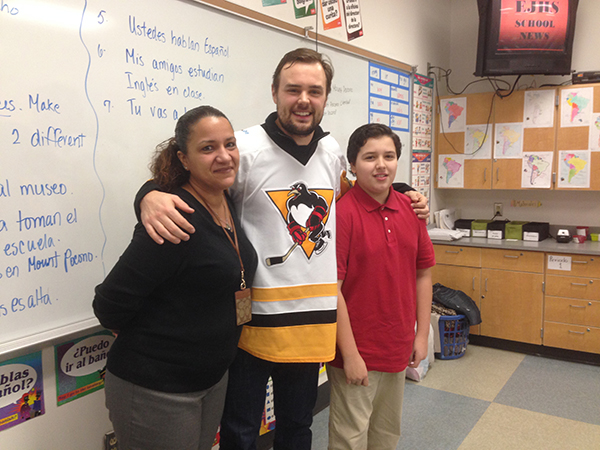 Usually a visit from the principal spells trouble for a class room.  But when Pocono Mountain East Junior High School principal Dr. Fanelli stopped by Mrs. Camacho’s seventh grade Spanish class last week, it was quite the opposite.

Dr. Fanelli interrupted the first period class to introduce Wilkes-Barre/Scranton Penguins defenseman Cameron Gaunce to the teacher and students.  Gaunce was on hand to acknowledge Mrs. Camacho as the first recipient in his ‘Tickets for Teacher’s’ program.

“We walked in the classroom, the teacher seemed pretty surprised,” said Gaunce, who is in his first season with the Penguins.  “And then after I started to talk a bit, she started to cry – with appreciation I’m assuming.”

Gaunce announced the formation of the program earlier this year.  Students and parents can nominate educators who they believe have gone above and beyond the call of duty through the Penguins website.  Gaunce then reads through the nominations and awards a pair of tickets to an upcoming game to deserving teachers.

Mrs. Camacho was nominated by Kyler Kuzar for her efforts in making the class fun, and taking a personal interest in each of her students.  She received two tickets for an upcoming Penguins game as a thank you for her dedication to the students from Gaunce.

“How she was described by the submission was that she had gone above and beyond the typical requirement of a teacher.  She had made an effort to notify all of the parents in the class of the children’s positives – what they had been doing well – when a lot of times you only hear from teachers if something goes wrong,” Gaunce said. “This teacher’s notifying parents of the good that they’re doing and the positives that are going on in the class.  I think when that happens, not only does it create a positive environment in the classroom, but it creates a positive environment at home.”

The appreciation for Mrs. Camacho was further evidenced when the entire class gave her a round of applause before Gaunce left.

“For these kids to know that the teacher is doing something for them on more than just the basis of learning, was exactly what I wanted to show that a lot of teachers will do for kids.”

If you would like more info on the Tickets for Teachers program, or how to nominate your favorite educator, just click here.