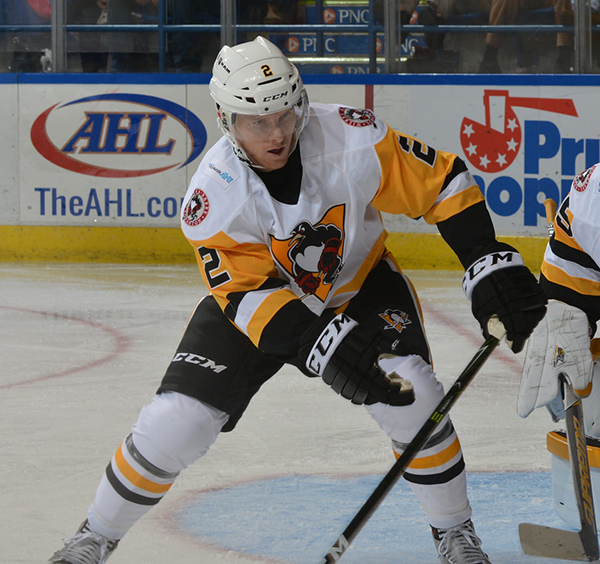 The Pittsburgh Penguins have recalled forward Jake Guentzel and defenseman Chad Ruhwedel from Wilkes-Barre/Scranton of the American Hockey League, it was announced today by executive vice president and general manager Jim Rutherford.

Defenseman Kris Letang has been placed on injured reserve.

Guentzel, 22, has been one of the top offensive threats in the AHL this season, leading the league with 21 goals and ranking second overall with 42 points in just 33 games. His plus-21 is second overall behind only teammate David Warsofsky.

The 5-foot-11, 180-pound Guentzel played in five games with Pittsburgh earlier this year, netting three goals and four points. Since he was returned to WBS, Guentzel has points in 14 of 17 games, totaling 14 goals, 11 assists, 25 points and a hat trick against Springfield on Dec. 27.

Guentzel was tabbed alongside goaltender Tristan Jarry to participate in the AHL All-Star Classic on Jan. 29-30 at Lehigh Valley.

Ruhwedel, 26, has skated in five NHL games with Pittsburgh this year, tallying two points (1G-1A) and a plus-3. He scored his first NHL goal on Dec. 23 versus New Jersey.

Wilkes-Barre/Scranton’s next game is Monday afternoon, Jan. 16, when they face off once again with the Syracuse Crunch at 1:00 p.m. at Onondaga County Oncenter War Memorial Arena. The Penguins’ next home showing is Saturday, Jan. 21, and their opponent will be the Hershey Bears.

DONATE YOUR COATS THIS FRIDAY