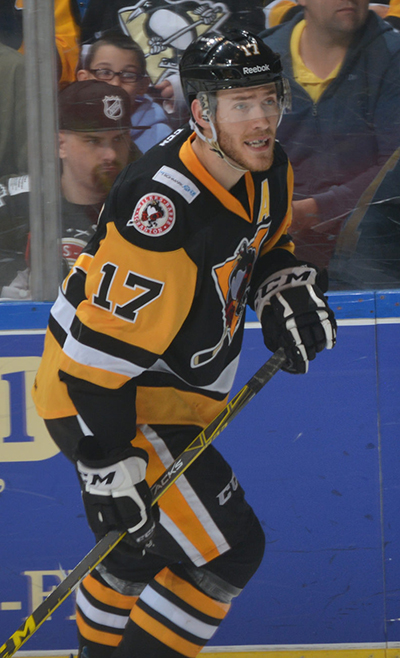 The Pittsburgh Penguins have recalled center Carter Rowney from the Wilkes-Barre/Scranton Penguins, it was announced on Thursday afternoon.

In addition, Pittsburgh has reassigned defenseman Steve Oleksy to Wilkes-Barre/Scranton.

Rowney, 26, is in his fourth season with the Penguins, and currently ranks eighth on the team with 21 points (10+11) in 24 games.  The Sexsmith, Alberta native missed 18 games due to injury from November 25-January 11, but has put together a six-game point streak (5+3=8) since returning to the lineup on January 13.  Included in that streak was a career-best four-game goal streak from January 13-18.

Signed to an NHL two-way contract this past summer, Rowney finished second on Wilkes-Barre/Scranton with 24 goals and 56 points last season. He was named the CCM/AHL Player of the Month for March 2016, during which time he posted a career-high nine-game point streak, and 17 points overall (7+10) for the month.

Rowney has appeared in 185 games with Wilkes-Barre/Scranton during parts of four seasons, recording 112 points (46+66), 87 penalty minutes and a plus-41 rating.

Wilkes-Barre/Scranton’s next game is Friday, Jan. 27, when they travel to upstate New York and face the Utica Comets for the first time this season. The Penguins’ next home game is Friday, Feb. 3 for the first visit in 2016-17 by the St. John’s IceCaps to Mohegan Sun Arena at Casey Plaza.

Individual game tickets for Feb. 3’s game and all Penguins home games are available at the Mohegan Sun Arena box office, online at TicketMaster.com, or by calling 800-745-3000.