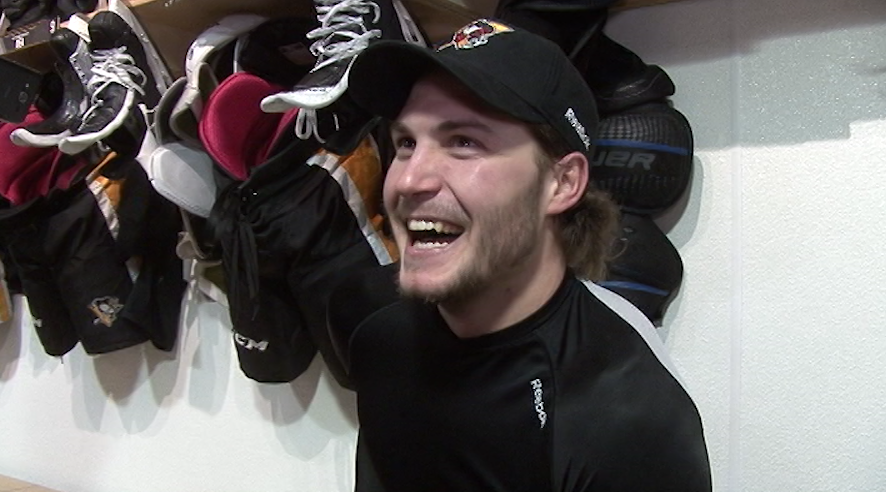 It’s been more than three months since Thomas Di Pauli last laced up his skates in a game for the Wilkes-Barre/Scranton Penguins.  So you could forgive the first-year forward if he was a little reticent at practice on Friday morning.

“Keep it simple here,” laughed Di Pauli.  “I’ve been out of commission for a while.”

The thing is, Di Pauli wasn’t talking about his skating or stick handling being rusty.  Rather he was cautioning the assembled media members who had gathered to pepper him with questions on his imminent return to the lineup.

It’s been a frustrating start to a career for the 22-year old Di Pauli.  The highly-touted scorer out of Notre Dame signed as a free agent with the Pittsburgh Penguins over the summer, and figured to be a big part of the Wilkes-Barre/Scranton offense headed into the 2016-17 season.  But a back injury in training camp delayed his pro debut for nearly a month, and he appeared in just eight games before suffering a lower body injury on November 26 against Bridgeport.

Di Pauli rejoined his teammates at practice this week, and is a good bet to see his first action of the new year Saturday night when the Penguins travel to face the Hershey Bears.

“Obviously these three, couple of months have been pretty hard.  But I’ve worked hard…to get back as soon as possible,” he said after practice at the Toyota SportsPlex this morning.  “I feel great out there.  It’s nice to be back out there, full contact, skating around with the guys.”

The re-introduction of Di Pauli to the Penguins lineup is just as good as – if not better than – the Penguins acquiring a forward at the trade deadline according to head coach Clark Donatelli.

“We’re glad to get a fresh pair of legs in the lineup,” said Donatelli.  “He was playing well when he got hurt.

“He’s an energy guy, he can kill penalties.  He’s really hard on pucks.  So we’re expecting him to go out there and play like he was playing before. He can bring some energy, get in on offense.”

Di Pauli, who was skating on a line with Oskar Sundqvist and Josh Archibald at practice Friday, also said he has a bit of a chip on his shoulder after missing so much time this season.

NOTES:  Frank Corrado, acquired by the Penguins at the trade deadline from the Toronto Maple Leafs, has yet to arrive in Wilkes-Barre due to immigration issues.  Donatelli was waiting to hear about the defenseman’s status as of noon on Friday.  If his paperwork isn’t approved this weekend, he could make his Penguins debut during the team’s three-game homestand next week.

“I hear good things [about Corrado],” Donatelli said.  “He’s a right side defenseman, he moves the puck.  He should fit in well with our style of play.

Individual game tickets for Mar. 8’s game and all Penguins home games are available at the Mohegan Sun Arena at Casey Plaza box office, online at TicketMaster.com, or by calling 800-745-3000.

Penguins ticket packages, including 12-game, and 10-voucher flex packs, are available directly through the Penguins offices by calling (570) 208-7367.