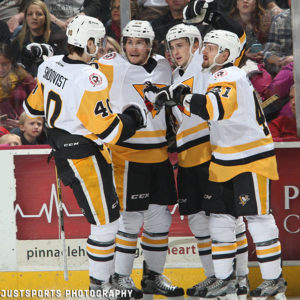 HERSHEY, PA – Goaltender Tristan Jarry turned in a stellar performance, stopping 14 shots in the third period alone, but the Wilkes-Barre/Scranton Penguins dropped a 2-1 decision to the Hershey Bears at Giant Center on Saturday night. The loss snapped a six-game winning streak against the Bears this season.

Jarry stopped 25 of 27 shots overall on the night, but was at his best in the final frame, when the Penguins were shorthanded four times.

Wilkes-Barre/Scranton opened the scoring 9:53 into the game when Josh Archibald redirected an Oskar Sundqvist backhander past Pheonix Copley for his 12th goal of the season.

The lead held for less than four minutes however, as Colby Williams grabbed a loose puck in the Penguins crease and deposited it for his fourth tally of the season.

The 1-1 score held until late in the second period, when Stanislav Galiev led an end-to-end rush and beat Jarry for his 18th goal of the season.

Copley was superb in his second start for the Bears since being reacquired by the team earlier this week, stopping 36 of 37 shots in the victory.

The Penguins failed to score on their lone power play attempt, while the Bears were held off the scoresheet on all six of their opportunities on the man advantage.

Wilkes-Barre/Scranton will return to action on Sunday afternoon, when they face the Hartford Wolf Pack at 3:00 p.m. at XL Center.

Wilkes-Barre/Scranton’s next home game is Wednesday, Mar. 8, and its opponent will be the Lehigh Valley Phantoms.

Individual game tickets for Wednesday’s game and all Penguins home games are available at the Mohegan Sun Arena at Casey Plaza box office, online at TicketMaster.com, or by calling 800-745-3000.

Penguins ticket packages, including 12-game, and 10-voucher flex packs, are available directly through the Penguins offices by calling (570) 208-7367.