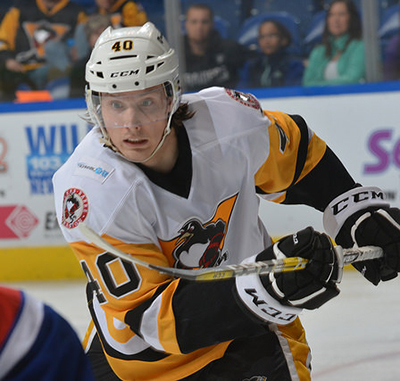 The Pittsburgh Penguins have re-assigned forwards Oskar Sundqvist and Josh Archibald to Wilkes-Barre/Scranton of the American Hockey League, it was announced Thursday by executive vice president and general manager Jim Rutherford.

Archibald, 24, has established new career highs in goals (14), assists (13) and points (27) in 57 games with Wilkes-Barre/Scranton this season.  He has appeared in three games with Pittsburgh this season, recording two goals and a plus-1 rating.

Sundqvist, 22, ranks fifth on Wilkes-Barre/Scranton with 39 points (16+23) in 53 games this season. He is scoreless in four appearances with Pittsburgh this season.

Wilkes-Barre/Scranton’s next game is tomorrow, Friday, Mar. 17, when it travels down the turnpike to Allentown to take on the Lehigh Valley Phantoms. Puck drop for the Penguins’ clash with the Phantoms is scheduled for 7:05 p.m. at PPL Center. The Penguins’ next home game is Saturday, Mar. 18, and once again they’ll face the Phantoms.