Well, the 2016-17 regular season has come to a close, but before we move on to our first round playoff matchup with the Providence Bruins, let’s take a quick look back at some of the big moments from the final night (and immediately after) of the Wilkes-Barre/Scranton Penguins 18th campaign in the American Hockey League. 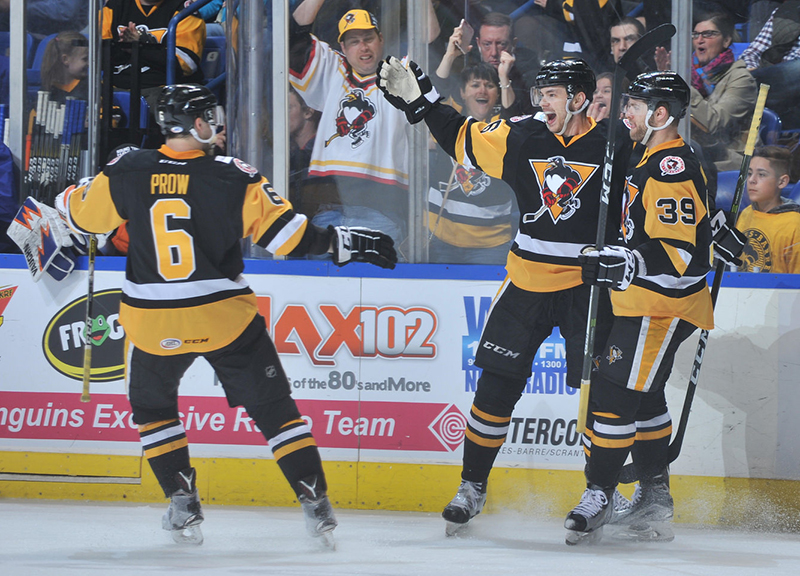 The Penguins entered Saturday’s action with 105 points in 75 games, good for a .700 points percentage, and trailing the San Jose Barracuda by .0015 percentage points for the top spot in the AHL standings.  A loss of any kind by the Pens or a win by the Barracuda would give the coveted MacGregor Kilpatrick Trophy to the team from the west coast.

And when Carter Verhaeghe picked up his second goal of the night to give the Bridgeport Sound Tigers a 4-2 lead over the Penguins with 6:40 into the third period, it look like Wilkes-Barre/Scranton would be relegated to the number two spot in the league table.

The league title probably wasn’t on Adam Krause’s mind as the puck dropped after that goal.  He was undoubtedly more focused on helping the Pens snap a two-game losing streak.

And he did just that – almost singlehandedly.

Just 91 seconds after the Sound Tigers took a two-goal lead, Krause got a stick on a loose puck and bounced it back to Jarrett Burton, who pumped home his seventh goal of the season from the top of the crease.

Krause was far from done though, as he gathered up a loose puck in the neutral zone, then rocketed by Devon Toews before stuffing a shot behind Eamon McAdam at 9:27 to tie the score.

Then, with the Pens killing a late penalty, Ryan Haggerty hit Krause with a breakout pass, and the second year pro beat McAdam low on the glove side for what turned out to be a shorthanded, game-winning goal.

That win moved the Pens to 107 points and a .704 points percentage at the season’s end, giving Wilkes-Barre/Scranton a slight and at least temporary edge in the race for the AHL regular season title.

But it would be two more hours until a champion was crowned.

The Bakersfield Condors had little to play for on Saturday as they hosted the Barracuda, having been eliminated from playoff contention earlier in the week.  The Barracuda entered the game with a 24-point advantage on the Edmonton Oilers farm club.

What figured to be a lopsided outcome for the Pacific Division leaders turned into a back-and-forth contest, with San Jose’s Buddy Robinson and Nick DeSimone sandwiching goals around a pair of Josh Currie scores for the Condors.

Picking up the extra point in overtime would give the Barracuda a .001 advantage over the Penguins in the league standings, and guaranteed home ice throughout the Calder Cup Playoffs.

But Currie beat Troy Grosenick – the third-ranked goaltender in the league – for the third time on the night just 1:25 into the extra frame, giving the Condors the win and the Penguins the MacGregor Kilpatrick Trophy for the second time in the team’s history.

Penguins netminders Tristan Jarry and Casey DeSmith combined to capture the Harry ‘Hap’ Holmes award, given to the goaltender or goaltenders who have played at least 25 games on the team which allows the fewest goals per game in the regular season.

Wilkes-Barre/Scranton has dominated the award in recent years, with team goalies capturing the trophy five times in the past seven seasons and six times overall:

Additionally, DeSmith finished the season with the lowest goals against average among qualified AHL goaltenders (minimum 1,440 minutes played) in the league at 2.01.  DeSmith entered the final day of the season trailing Providence’s Zane McIntyre by .02 goals per game, but the Bruins backstopper allowed three goals to the Hershey Bears on Saturday night and saw his GAA go from 1.99 to 2.03 on the season.

Goaltender Sean Maguire recorded his first AHL victory with a 22 save performance on Saturday against the Sound Tigers.  Two other players – Kevin Schulze and Dylan Zink – made their AHL debuts in the contest.