David Warsofsky is no stranger to the playoff rivalry that has blossomed between the Wilkes-Barre/Scranton Penguins and Providence Bruins over the past four years.  The second team AHL all-star was a member of the Bruins squads that faced off with the Pens during both the 2013 and 2014 Eastern Conference Semifinal series.

“I’ve been on the other side of it, where I’ve been playing against Wilkes-Barre,” said Warsofsky.  “It’s always an intense series.”

The first postseason head-to-head between the two teams produced a bit of AHL history, as the Penguins rallied from a three games to none deficit to win the best-of-seven series in 2013.

The clubs met the following year in the second round once again, with the Penguins advancing thanks to wins in Games Two, Three (double OT), Five and Seven.  The final game of that second series produced some heart palpitations for Pens fans, as the home team tallied five times in a six minute span during the second period, only to see the Bruins claw back with four straight goals, including one from Warsofsky. 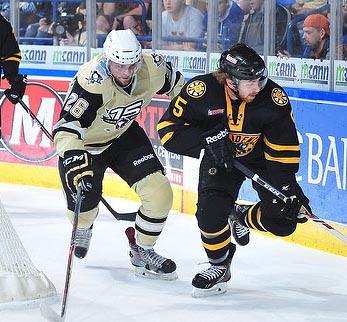 Those face-offs provided more than a few thrills for Wilkes-Barre’s backers (including a ridiculous individual effort from Brian Gibbons).  But a more suitable barometer for this year’s post-season meeting would be the six-game regular season series the Pens and Bruins recently completed.

Wilkes-Barre/Scranton posted wins in four of six contests, with three of those coming by a single goal.  Providence produced a 5-2 win on December 30, but that was the only game to finish with more than two goals separating the clubs.

“Both of these teams, we kind of have the same type of hockey that we play.  We both play hard hockey,” Warsofsky said.  “Our forwards are physical, our D move the puck.  It’s a grind of a game for both teams.

“You get two teams that play really hard against each other, it usually makes for a fun series.”

Closely contested games figure to be a fixture of the upcoming contests between the clubs.  The Penguins have the AHL’s reigning goals against average king, Casey DeSmith, between the pipes, while Providence’s Zane McIntyre finished a scant .02 percentage points behind the second-year puckstopper.

Part of McIntyre’s success has been the willingness of the players in front of him to physically sacrifice their bodies.

“They put a big emphasis on blocking shots, especially out of their forwards,” Warsofsky said.  “As defensemen, if we can get [a shot] by that first layer, I think that’s our job most importantly.  We’ll have a net front presence and let them do their jobs after that.

“We’ve got to get shots to the net, make it hard for their goalie to see the puck.  Hopefully a few will go in.”