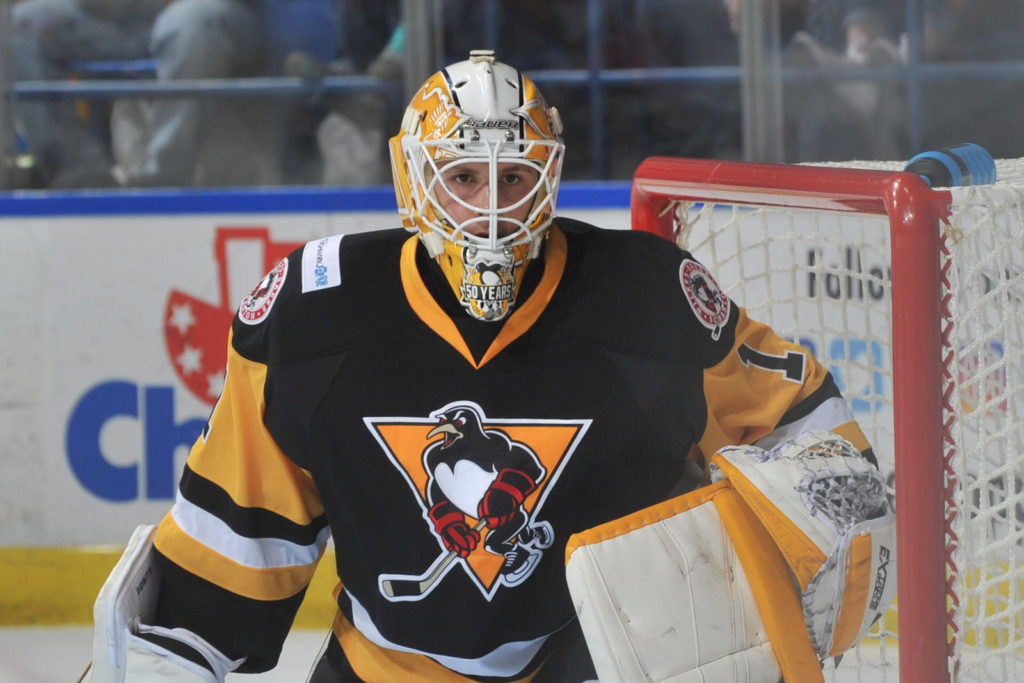 Casey DeSmith’s rise from ECHL backup to AHL postseason starter last year was somewhat unexpected.  After all, the rookie out of Rochester, New Hampshire, didn’t even crack the Wheeling Nailers lineup until December of 2015.

But as the 2015-16 regular season ran down, DeSmith found himself firmly planted in the Wilkes-Barre/Scranton crease.

Injuries and circumstances led to DeSmith’s initial rise up the organizational depth chart.

First, Matt Murray received a permanent promotion to Pittsburgh in early March, freeing up a space in Wilkes-Barre’s goaltending corps.  Tristan Jarry subsequently assumed the regular starter role for the AHL club, with veteran Brian Foster serving as the backup.

But Foster faltered, and DeSmith leap-frogged Wheeling regular Frank Palazzese to move into the second position on the Penguins roster.

Jarry experienced a bit of a late-season slump, and DeSmith stepped in to hold down the goaltending duties during the final week of the campaign.

He kept the crease as the Penguins moved into the postseason, helping the team to a pair of wins on home ice to start the best-of-five series against the Providence Bruins.

But the contest that seemingly cemented DeSmith’s standing in the organization was Game Three, which took place in Providence on April 23.  DeSmith turned aside an astounding 59 shots – a new team record – as the Penguins posted a 5-4, double overtime victory to sweep the Bruins from the postseason.

“It’s a game I’ll never forget, that’s for sure,” said DeSmith.  “Double overtime and winning in the fashion that we did to sweep the series, was really special, one of the most exciting times of last year.”

The Penguins were ousted by the Hershey Bears in overtime of Game Seven in the Atlantic Division Final, but by that time DeSmith had solidified his stature as a regular in the Wilkes-Barre/Scranton lineup.  He went from playing on a tryout contract in the playoffs to inking an AHL deal in early July, essentially guaranteeing himself a spot in northeast PA for the 2016-17 season.

Despite the late-season success he enjoyed, DeSmith was tabbed to hold down the backup role in Wilkes-Barre, with Jarry figuring to receive the bulk of the playing time.  During most of the season, DeSmith saw one start for every two that Jarry played.

But as the season wound down, DeSmith once again found himself thrust into the limelight as the team’s regular starter.

With their playoff seeding already set in stone, the Pittsburgh Penguins recalled Jarry on April 9, giving him his first NHL start that night against the New York Rangers at Madison Square Garden.  And when Matt Murray came up injured prior to the Pens first playoff game, Jarry moved into the backup role for Pittsburgh.

With a week left in the regular season, DeSmith found himself back in familiar territory for Wilkes-Barre/Scranton.

“It’s kind of funny how that worked out again,” said DeSmith. “You never want to see Murray or anyone go down.  But I’m really happy to have this kind of opportunity to take over like I did last year.  Playoffs is a really fun time, and to be involved in it, to be able to play playoff games is a privilege for anybody.”

And just like last year, DeSmith is peeking at a good time. Since March 5, he’s gone 7-1-1 while allowing just 12 goals in that span.  His 2.01 goals against average during the regular season was the best in the AHL, and his .925 save percentage put him in a tie for second place.