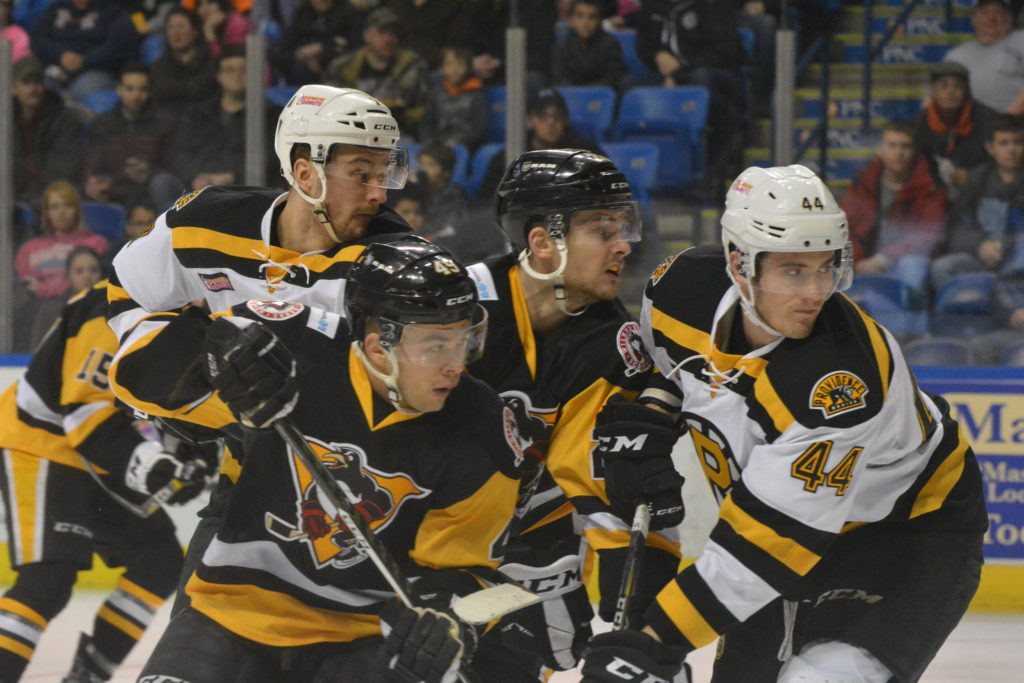 The Wilkes-Barre/Scranton Penguins and Providence Bruins are no strangers to one another.  The teams, who will face off in the Calder Cup Playoffs for the fourth time in the past five seasons starting on Friday night, matched up six times during the 2016-17 regular season.  Here’s a quick look back at the season series between the Atlantic Division foes in our Playoff Primer.

The Penguins lone shootout win of the season.  Wilkes-Barre/Scranton never trailed in the contest, holding leads of 1-0, 2-1 and 4-2.  But Peter Cehlarik scored with less than two minutes left in the third, and Wayne Simpson tied the score early in the third to force extra time.  Garrett Wilson tallied in the fourth round of the shootout, the only shootout goal by either team.  Tristan Jarry made 38 saves in regulation and overtime, and another four in the shootout.

J.S. Dea, Oskar Sundqvist and Jake Guentzel scored for the home team, while Casey DeSmith stopped 28 of 29 shots for the win – the lone blemish coming on the power play courtesy of Danton Heinen.

Providence jumped out to a 2-1 lead after the first 20 minutes of play and never looked back, scoring three consecutive goals in the second period to take the win in Wilkes-Barre.  Josh Archibald and Oskar Sundqvist tallied for the Penguins.  Casey DeSmith took the loss for the Pens, stopping 17 of 22 shots in 40 minutes of play.

A see-saw battle ended when Jordan Szwarz notched his 13th goal of the season at the 15:56 mark of the third period.  Dominik Simon and Derrick Pouliot scored for the Pens, and Tom Kostopoulos had two assists.  Tristan Jarry stopped 32 shots in defeat.

Dominik Simon scored 31 seconds into the game, and the Pens scored three times in the first 11 minutes of the first period to chase Zane McIntyre from the Bruins’ net.  Josh Archibald (1+1) and Barry Goers (0+2) had multiple points in the game.  Jarrett Burton’s fourth goal of the season was the game-winner.  Tristan Jarry stopped 26 shots for the win.

Cody Wydo netted his first AHL goal and Jarrett Burton tallied his second game-winner in the season series against the Bruins.  Casey DeSmith stopped 33 shots for the victory.