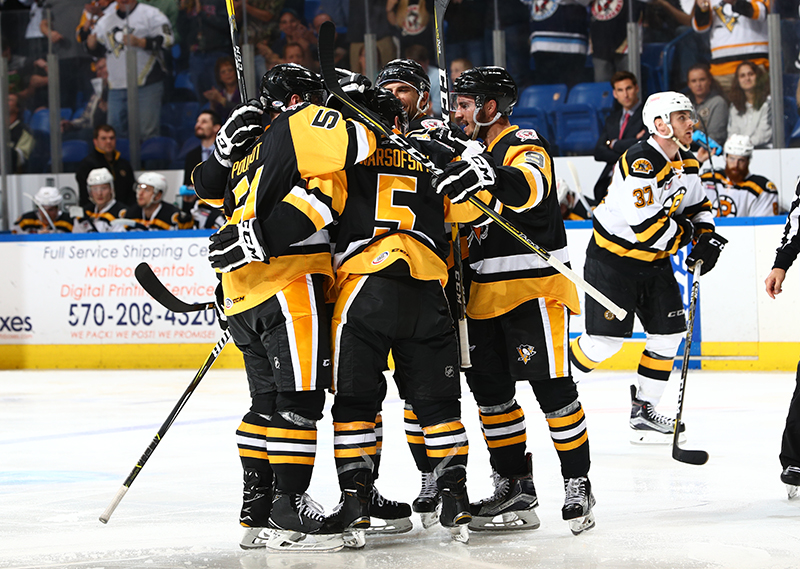 It all comes down to this.

The Wilkes-Barre/Scranton Penguins and Providence Bruins meet in a decisive Game Five on Sunday afternoon at the Mohegan Sun Arena.  The winner moves on to the Atlantic Division Finals.  The loser is done for the season.

But if history is any indicator, the Penguins are in a good position to move on.

The Penguins have played in seven best-of-five series prior to this season, and have gone 6-1 in those playoff rounds.  Two of those series went the distance, with Wilkes-Barre/Scranton winning on both occasions.

The team’s very first appearance in the Calder Cup postseason came against the Syracuse Crunch in the 2001 Western Conference Quarterfinal.  Similar to this season, the Pens posted wins in Games Two and Three, before recording a 6-2 victory in Game Five on home ice.

The only other best-of-five to go five games came in 2012, when the Penguins jumped out to a 2-0 lead over the Hershey Bears, dropped Games Three and Four at the Giant Center, before pulling out a 2-1 win in Game Five back home.

The lone time the Pens failed to win a best-of-five series was back in 2003, when they fell to the Grand Rapids Griffins, 3-1, in the Western Conference Quarterfinal.

The only first round, Game Five loss for the team came on April 26, 2006, when the Bridgeport Sound Tigers defeated the Penguins, 3-2, in overtime.  Wilkes-Barre/Scranton went on to capture Games Six and Seven to advance to the East Division Final.

WITH A CHANCE TO CLINCH/WHEN FACING ELIMINATION

Individual tickets for Sunday afternoon’s Game Five are available at the Mohegan Sun Arena box office, online at TicketMaster.com, or by calling 570-208-7367.