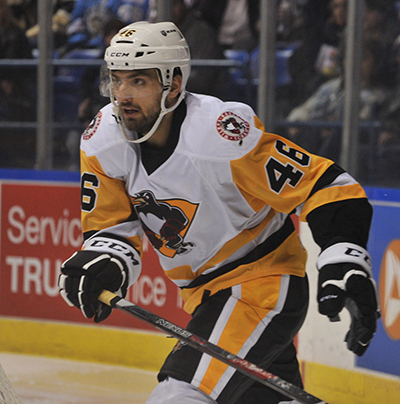 At first, Zach Aston-Reese was getting all the breaks. He scored in the first period of his first AHL game, he rattled off a franchise-best four-game point streak to start a pro career, and he was skating every night with the Wilkes-Barre/Scranton Penguins’ top veterans.

Then, suddenly, his luck changed, and it couldn’t have come at a worse time. Aston-Reese suffered an upper body injury in the Penguins second-to-last game of the season.

He sought several second opinions from doctors in Pittsburgh. Every trip only garnered marginally better news, but nothing ground-breaking. One thing became painstakingly clear: there was no way he was going to be able to play in the first round of the Calder Cup Playoffs.

“I wish I could have kept going,” Aston-Reese said. “I really wish we could know how things would have went if I didn’t get this injury… I’m not sure if ‘disappointed’ is the right word, but it definitely doesn’t feel good.”

Aston-Reese was making progress towards a return as the postseason carried on, but he still wasn’t cleared to play in the Penguins’ decisive Game Five of their Atlantic Division Semifinal series against the Providence Bruins. He had to watch that game, and all of its prior contests, from suite level, a location that provided him with an excellent view of where he’d rather be.

The Hobey Baker finalist was left feeling powerless to the result playing out in front of him.

“It was tough, that last game, especially,” he said. “From up top, you see things from a different perspective. We totally outplayed them. [Providence] is not a bad team by any means, they cycle the puck really well and have some crazy good players. But a lot of our shots just couldn’t find a way in. It was tough because you get that feeling that you want to get out there and help, but you can’t.”

The sting from the loss was amplified by not only his lack of influence on the series, but by the fact that he quickly grew invested in the Penguins’ fortunes. Joining the club after his senior season of college hockey had come to an end, Aston-Reese might have never emotionally connected with Wilkes-Barre/Scranton’s goals. But he did, and it’s all thanks to the people he met when he first came in.

Greeted with nothing but compassion when he entered the fold in late March, Aston-Reese quickly integrated with the locker room and its many personalities.

“Coming to a team late in the season is tough,” he said. “You don’t know where you fit in, but everyone was really welcoming.

While Aston-Reese had to watch from afar while he and his new friends’ season came to an end, he ultimately gives his brief time in the AHL a positive review. In his eyes, the 10 games he played gave him the perspective necessary to thrive next year when he embarks on his first full professional season.

“I thought this was a really good experience for me,” Aston-Reese said. “You learn a lot about the whole three-in-three thing. The schedule change is such a huge difference, AHL vs. college. And the practices, too. The pace, the everyday grind; it was an eye-opening experience for me.”

Aston-Reese plans to spend the early portion of his summer healing properly, then working on the little details of his game in which he felt slightly insufficient now that he understands what pro hockey is all about. That being said, the adversity he faced at the end of his ATO run has him itching to start next season as soon as possible.

“I can’t wait to get after it next year, start from zero and work at another run.”