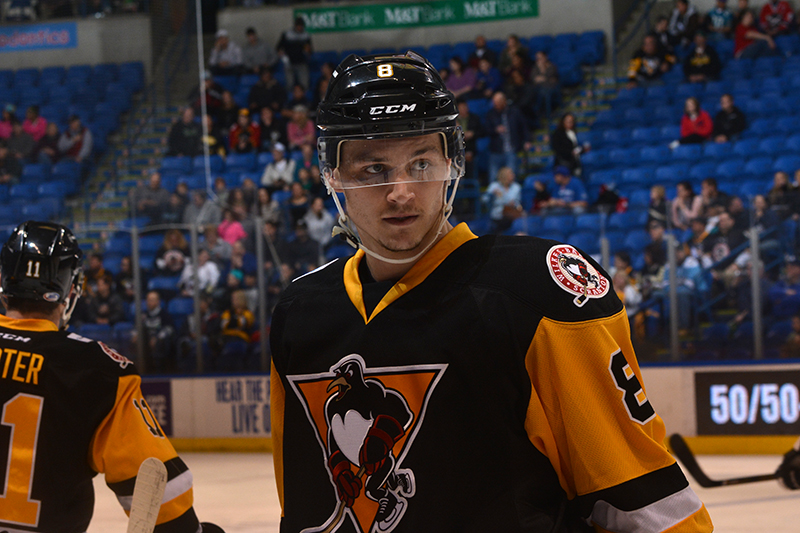 Fans of the Wilkes-Barre/Scranton Penguins have grown accustomed to seeing undrafted, unheralded players work their ways up from the ECHL and solidify themselves in the American Hockey League. Barry Goers falls into that category, as does Sahir Gill. Carter Rowney is perhaps the most notable example of these type of players, not only becoming a team MVP in the AHL, but now holding  a roster spot in the NHL.

Now, Brett Stern is trying to add his name to that list.

After spending the first season and a half of his pro career with the Wheeling Nailers, Stern played 17 regular season contests and one playoff game with the Penguins. All of those games came while on a professional tryout agreement.

Despite playing without an AHL contract, Stern left a big impression on Wilkes-Barre/Scranton’s coaching staff.

“Stern played terrific,” said head coach Clark Donatelli. “When he came in, too, his first few games were all division games. Hershey, Lehigh, he was thrown right into the fire… He showed he could play. He’s an AHL player.”

Stern’s emergence was made all the more impressive considering who his colleagues were once he made it up from the ECHL. He wasn’t handed ice time on team bottoming out in the standings, he was making waves on the eventually MacGregor Kilpatrick Trophy-winning club. Furthermore, the Penguins’ defense boasted the likes of Tim Erixon, Cameron Gaunce, Frank Corrado and Derrick Pouliot, who have all logged significant time in the NHL at one point in their careers or another.

There weren’t exactly a lot of open spots on the Penguins’ blue line, and yet Stern continued to stick around.

“This group is a special group of players,” he said. “Just looking around the rest of the defensemen in this locker room, it’s pretty surreal to think you’re playing with them.”

The transition straight to the AHL wasn’t an easy on for Stern, though. While his strong, shut-down defense was turning heads right from the get-go, there was a lot going on beneath the surface.

“It’s hard at first,” Stern said. “You don’t feel comfortable, but at the same time, you want to play with confidence and the mindset that you’re there for a reason. It was tough at first, but I got settled in eventually. And I think I got better and better as the year went on.”

That gradual improvement has been a hallmark of Stern’s game since he turned pro following four seasons of unprecedented success with Minnesota State University’s hockey program. Stern claims that biggest steps he’s made from the start of his first pro season, is shaking the “college hockey mentality” that didn’t necessarily cater to his style of play.

“Because you only play 40 games in a season and mostly on weekends, college hockey is a little bit easier to just go, go, go,” he said. “It’s a lot of running around and hitting and guys ending up out of place. It’s not as structured. The pro game, you can’t be running around. If you’re out of position, they’ll expose you in a heartbeat. It’s a thinking game. You want to outsmart the other team a lot of the time as a defenseman, so it’s like a game of chess. It took me a while to adjust to that, but I think the pro game suits me more.

It’s more think then react, whereas the college game is more react then think.”

When he’s not hunting, fishing or visiting his relatives north of the border, Stern will spend most of his summer thinking about what the next move is for him in his career and then reacting accordingly.

“Hopefully, I see more time in the AHL next year,” Stern said. “But if not, I’m going to keep working. That’s not a reason to stop. I just need to take the lessons I learned from this year and apply them to getting better moving forward.”

Season Ticket Memberships for the 2017-18 Wilkes-Barre/Scranton Penguins season are on sale now.  Call the Penguins directly at 570-208-7367 to get yours, or fill in the form below, and a Penguins account executive will reach out to you.
Tags: AHL, American Hockey League, Brett Stern, Hockey, National Hockey League, NHL, Pittsburgh Penguins, Wheeling Nailers, Wilkes-Barre/Scranton Penguins