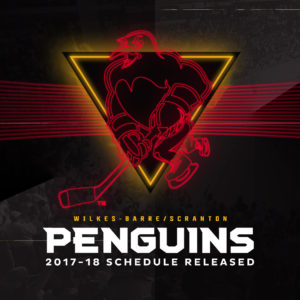 WILKES-BARRE, Pa. – The full 2017-18 American Hockey League regular season schedule was announced this afternoon, and the Wilkes-Barre/Scranton Penguins will officially begin their 19th season on Saturday, Oct. 7, when they face off with the Charlotte Checkers at Mohegan Sun Arena at Casey Plaza.

The puck will drop on weekend evenings or afternoons for 30 of Wilkes-Barre/Scranton’s 38 home games. The Penguins will be bringing back promotions such as $14 Fan Fridays and Kids Get In Free Sundays for the 2017-18 season. Starting in December, lower level tickets for Friday night home games are just $14 while supplies last in addition to $2 select beers available from 6:00-7:30 p.m. For the Penguins’ five Sunday home games, children age 14 and under can attend free of charge with the purchase of an adult ticket, and four of those games will feature a postgame skate with select players. Information on other promotions for the season will be announced at a later date.

The Penguins begin the season with nine of their first 12 games taking place on home ice, but their longest homestand of the season lasts only four games. The Penguins will play four-consecutive home games on three separate occasions this season, once in October, December, and another split between March and April. Likewise, Wilkes-Barre/Scranton has four different four-game road trips on the schedule, their longest of the season. Those stretches of road games are slated to take place in January, February, March and April.

The Penguins will play seven teams during this upcoming season that did not appear on the team’s 2016-17 schedule: the Milwaukee Admirals, Rockford IceHogs, Grand Rapids Griffins, Laval Rocket, Belleville Senators, Binghamton Devils and Charlotte.

Wilkes-Barre/Scranton has never played a regular season game against Rockford, Laval or Belleville. Grand Rapids last visited Northeastern Pennsylvania during the 2008-09 season, and Milwaukee hasn’t played a regular season game in Wilkes-Barre/Scranton since 2001-02. The Penguins last took on the Checkers at Mohegan Sun Arena at Casey Plaza during the 2010-11 campaign. Binghamton is playing its first season under a new NHL affiliation.

Wilkes-Barre/Scranton season ticket packages for the 2017-18 season, including full season, 22-game, 12-game and Flexbook plans, are available by contacting the Penguins directly at (570) 208-7367.