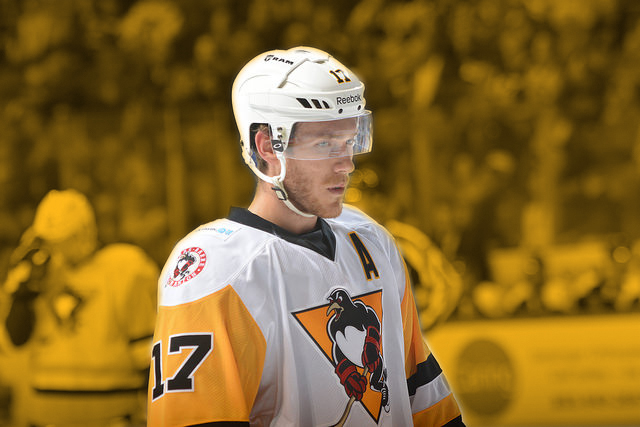 The year is just slightly more than half way over, but it’s safe to say that nobody is having a better 2017 than Carter Rowney.

But Rowney is no overnight sensation.

An undrafted free agent out of the University of North Dakota, Rowney broke into the pro ranks on a professional tryout contract with the Abbotsford Heat following his 2012-13 senior season.    After splitting the next two seasons between the ECHL’s Wheeling Nailers and Wilkes-Barre/Scranton, Rowney finally found firm footing with the AHL Pens in 2015-16.

And how did he respond? Simply by leading the team in regular season scoring (56 points), finishing second on the club in goals (24), third in assists (32) en route to being named Wilkes-Barre/Scranton’s MVP for the year.

That performance also put the Grand Prairie, Alb., native firmly in Pittsburgh’s picture, as the NHL club signed him to a two-year deal in March of that season.

Less than five months after signing his first NHL contract, Rowney married longtime girlfriend, Danielle, in August of 2016. He began the 2016-17 season with Wilkes-Barre/Scranton, but was promoted to Pittsburgh in late January.

He played his first NHL game on Jan. 31 against Nashville. At the time, that one game after grinding his way up from the ECHL as an undrafted free agent out of college seemed like the  fairy tale ending.

But Rowney’s remarkable story continued as he recorded his first NHL point on February 4, and netted his first goal a little over a month later on March 17.

With each game, Rowney continued to carve out a niche for himself. Despite not being a big goal-scorer, his reliable physical player and penalty killing prowess earned praise and, by the time the playoffs rolled around, he was a staple of the Penguins formidable attack.

“That’s something I take pride in,” said Rowney. “Find a role that I could be on the team, accept that role and try to do my best in that role.”

That he did, and his best performances came during the Eastern Conference Final against the Ottawa Senators, an exciting time both on and off the ice for Rowney.

Between Games One and Two in Pittsburgh, his first child, a son named Anders, was born. With the due date actually being later that week, when Rowney would’ve been playing Games Three and Four in Canada’s capital, the timing couldn’t have been more perfect.

Following Anders’ arrival, Rowney played some of his best playoff hockey. In Game Four, his ice time was more than any forward, aside from captain Sidney Crosby, and even then he was only 21 seconds short. But it was Game Five where he really showcased what he was capable of. Rowney notched three assists and a plus-four rating, besting superstars like Crosby, Evgeni Malkin and Phil Kessel to earn the number one star of the game.

After years of shuffling through minor league contracts to get his foot in the door of pro hockey, Rowney’s season of firsts culminated in hockey’s ultimate prize, with the Penguins standing triumphant, the Stanley Cup hoisted over their heads.

“Every time I would suit up in that Penguins uniform and get on the bench, I would just take a second and look in the crowd and realize where I was,” said Rowney, reflecting on his first NHL playoff experience. “It was just a fun time to play. And to cap it all off, to lift Lord Stanley, that was just unbelievable.”

In just half a season, Rowney became an inexpensive, but crucial part of the team. There’s even talk that he could be the perfect long-term replacement for Matt Cullen, should the wily veteran decide to retire. With his average of 15 minutes of ice time per game and his 21 draws at center being the most of the team behind the four regular centers, Rowney has certainly proved his worth. If the comparison bothers Cullen, he hasn’t shown it.

“It’s easy to get behind a kid like that who’s had to work for everything he’s earned,” said Cullen, following the Penguins shut out of the Senators in game five.

For now, at least, Carter Rowney can focus on his new, growing family as he’s had to delegate most daddy duties to his wife for nearly a month while helping the Penguins win their second Stanley Cup in as many years. He’ll spend the time off trying to figure out, much like everyone else, how the undrafted kid from the prairies now has his name etched alongside the greats.