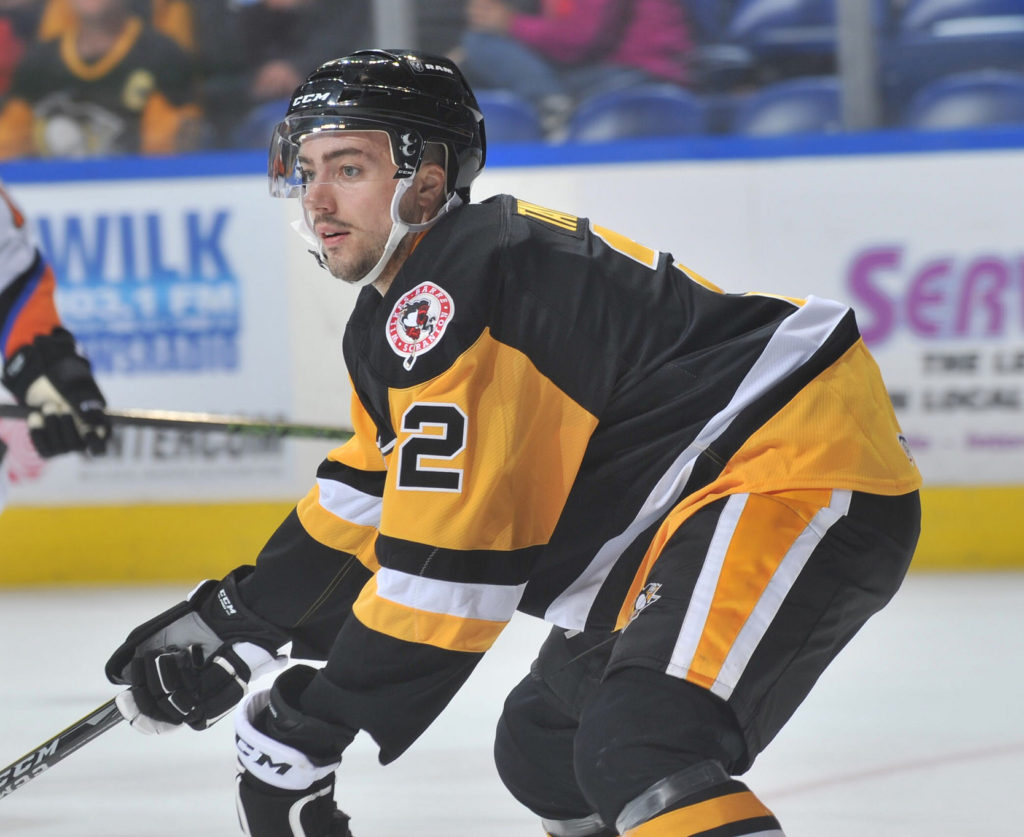 That was the total number of defenseman taken by the Pittsburgh Penguins during the 2014 and 2015 NHL Entry Drafts.

The dearth of blueliners selected was the consequence of several factors: the Penguins had traded away a number of picks in trades which helped the Penguins win back-to-back Stanley Cups; following the formula of opting for the best player available when Pittsburgh was on the draft clock; and perhaps a slight organizational philosophical lean to help build up the forward prospect pipeline.

In recent drafts, the Penguins have since shifted their focus to the backline once again, with eight defensemen chosen over the last two drafts.

That one selection though – taken with pick number 203 in the seventh round of the 2014 draft – looks ready to make an impact on the Penguins starting this season.

Seeing him on the ice during the Pittsburgh’s recent development camp, Jeff Taylor seems the template of what Penguins defenseman have come to embody lately.  Taylor is not a towering figure (5-11, 185 lbs.) in the defensive zone, but he has good speed, awareness and passes the puck efficiently.

The 23-year old has a championship pedigree as well.  In his lone season in the USHL, he helped the Dubuque Fighting Saints claim the league’s Clark Cup.  The following year, as a freshman at Union College skating alongside future NHLer Shayne Gostisbehere, Taylor and the Dutchmen on to win the first NCAA Championship ever for the school.

Taylor was drafted that summer by the Penguins and his ability have had many speaking glowingly of the defenseman.

Penguins assistant general manager Billy Guerin told the Post-Gazette in December, “I remember his first development camp, everybody was like, ‘Oh, wow, look at this kid. He can move the puck, he can skate, he’s quick. He thinks the game well.’ He’s an undersized guy, but he has the ability to get himself out of trouble because he’s got great feet and he thinks the game well.”

Taylor officially signed his entry-level deal with Pittsburgh after completing his four-year college career this past March.  His first pro experience came via six regular season games with Wilkes-Barre/Scranton and, while it didn’t reach the lofty heights of his early success at Union, Taylor’s growth both on and off the ice over the short stint was evident.

“His improvement was impressive,” said Penguins assistant coach JD Forrest. “From game one to the last game he played with us, he got better every day.  I was surprised at how fast he picked up the game.  He’s a real smart player.”

Like most players coming out of the collegiate or junior ranks, Taylor will work on his power and strength to complement his already sound decision making with the puck.  Though he finished last season on a high note, Taylor’s experience in Wilkes-Barre/Scranton was still an eye-opener.

“It was definitely huge for me to get my feet wet and understand how the pro game works,” said Taylor. “Just the preparation and the recovery, and all that stuff you don’t see that’s behind the scenes. That was big for me coming in.”

Taylor wasn’t the only defenseman to get a taste of AHL life late last year, though.

Dylan Zink, an undrafted free agent who skated four seasons at UMass-Lowell, signed an AHL contract with the Wilkes-Barre/Scranton Penguins and joined the team on an ATO in April.

After averaging 25 points through his previous two seasons, Zink broke out his senior year with 36 points (10G-26A) in 41 games, ranking fourth among NCAA defensemen.  He helped lead the Riverhawks to the Hockey East Championship, a berth in the National Championship and was named a Second Team All-American.

Offense has been a mainstay of Zink’s game for the majority of his college career.  He stands as the only defenseman in school history to record three consecutive seasons with double digit goals.   Penguins management was pleased to be able to sign the 24-year defenseman, and Zink also saw a match with the Pittsburgh organization, noting “the way they develop their players.  They’ve been using their minor league systems a lot up through the NHL.”

As he maps out a path in his mind for career success, Zink doesn’t have to look too far to find someone who has already blazed a trail that he might want to follow.  Penguins defenseman Chad Ruhwedel was also once a similarly-sized, undrafted free agent skating for UMass-Lowell, where he too earned a Hockey East title and was named an All-American. Turning pro after his junior year in 2012-13, Ruhwedel signed with the Buffalo Sabres and spent most of three seasons in the American Hockey League with the Rochester Americans.  Joining the Pittsburgh Penguins last off-season, Ruhwedel graduated full-time to the NHL in January, hoisted the Stanley Cup a few months later and re-signed with Pittsburgh on a one-way deal on June 22.

Zink would not mind following a comparable model.

“I think I kind of play pretty similar to him and just to see the success he’s had.  He’s spent some time in the minor leagues in the ‘A’, but he got his chance and he’s been rewarded with it.”

For now, Zink’s focus is on preparing for his first season as a pro.

“Right now, I’m just trying to become a better skater,” Zink said. “Working on that and just want to put on a lot of strength. I know the next level, it’s a long season so it can definitely take some wear and tear on your body so I’m really just trying to work on my skating and get as strong as I can.”

Come the start of the 2017-18 season, Taylor and Zink will officially begin their first seasons as pro hockey players.  That puts these two talented players at the forefront of the prospect group that could be next to man the backline for the Pittsburgh Penguins.