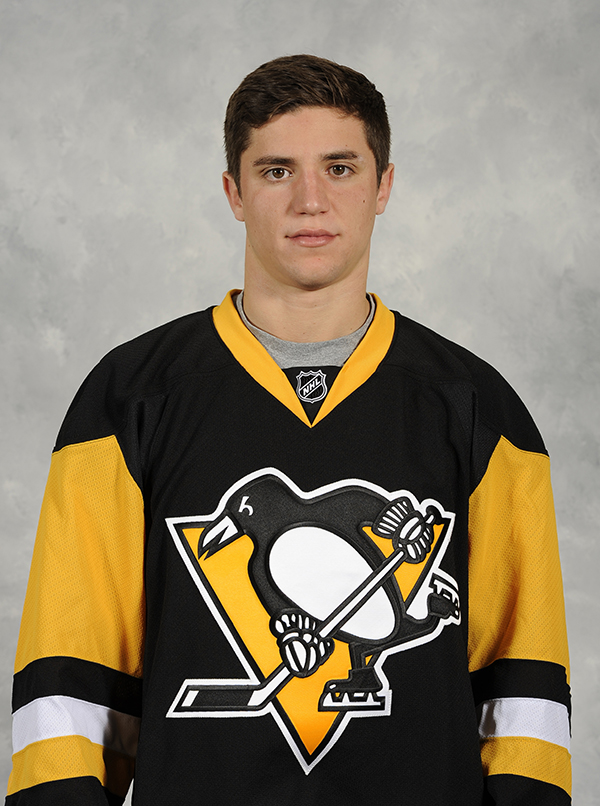 You could say Freddie Tiffels has some history with the Penguins organization.  It is more than his sixth-round (167th overall) selection in the 2015 NHL Draft.  No, this is about a winner-take-all game on the international stage, but we’ll get to that later.

Tiffels signed a two-year, entry-level contract with the Pittsburgh Penguins on June 22, capping off a whirlwind Spring for the 22-year old from Cologne, Germany.
His junior year at Western Michigan University was a memorable one.  After two down seasons, Tiffels was part of a resurgence that saw the Broncos thrive in a stacked NCHC that featured the last two teams standing in the NCAA tournament – Denver and Minnesota-Duluth – not to mention perennial powerhouse North Dakota.  Tiffels tied a career high with 21 points (9G-12A) in 37 games as Western Michigan spent 10 weeks in the top 10 and finished tenth in the final USCHO poll.  Though the Broncos fell to Air Force in the first round of the NCAA Championship, Tiffels would go on to make his mark in a not-so-small tournament a short time later.
Though most North American hockey fans hone in on international play every four years at the Olympics, the World Championships takes place annually and is as big as it gets in international play.  Tiffels received an invitation to try out for Team Germany and was the only collegiate player to make the roster. Through training camp and exhibition games, he used his high-end speed to repeatedly catch the eye of Head Coach Marco Sturm.  The relatively-unknown Tiffels made a name for himself skating alongside players such Leon Draisaitl, Christian Ehroff and Dennis Seidenberg.
After Tiffels scored his first international goal in a loss against Russia, Sturm told DW, “”Freddie is giving us more than we had expected. He always goes all out.”
The German forward was hardly done and saved his biggest performance for the most important game of the group stage round robin.  And this is where the history comes into play.  Maybe not so much against the Penguins as a whole, but instead another prospect in their system.
On May 16, in Tiffels’ hometown of Cologne, Team Germany took on a Latvia side that included Penguins forward Teddy Blueger.  The winner of this game moved on to the knockout stage. The loser was done for the tournament.  After a thrilling 65 minutes of regulation and overtime hockey could only net a 3-3 deadlock, the two teams headed to the shootout.  Five shooters skated out to center ice and all five failed to score on the opposing netminder.
With the game on his stick, Tiffels raced into the slot and dragged the puck back to his forehand before unleashing a wrist shot through the five-hole of Latvian goalie Elvis Merzlinkins.
About the moment, Tiffels said, “I think I was a little bit lucky because Latvia missed three times and [Germany] only missed twice.  I could only be the hero.  If I don’t score, it just goes to another around.  So, I think there was not too much pressure, but when I scored it was probably the best moment of my life.”
After that goal, the celebration for Germany was on.  Not so for Blueger and Team Latvia.   The good times almost carried on for Germany, nearly shocking the world and hanging with Canada, but eventually falling 2-1.
Following the amazing World Championship run for Tiffels, the Penguins forward now turns his attention to the next phase of his career.  A participant in Pittsburgh’s development camp last month, Tiffels realizes his dreams of making the NHL include a first stop in Wilkes-Barre/Scranton, but has been working this summer to get ready for the onset of his pro career.  With speed already a part of his game to go along with some good size (6-1, 201 lbs.), Tiffels is focused on the develop the cerebral element of the hockey skill set.
“I want to get better at everything, but I think I want to get smarter and making the right decisions on the ice.”
Though familiar with each other from past camps in Pittsburgh, Tiffels has yet to catch up with Blueger since that night at Lanxess Arena.  They will seem to have plenty of time to do so come Penguins training camp this fall.  Whether they reminisce or not, Tiffels will always have the fond memories of his entire World Championship experience.
As one of the new guys on scene now with Wilkes-Barre/Scranton, Tiffels will to try to generate some more moments versus the rest of the AHL.
Tags: AHL, American Hockey League, Freddie Tiffels, Germany, Hockey, Latvia, National Hockey League, NHL, Pittsburgh Penguins, Wilkes-Barre/Scranton Penguins