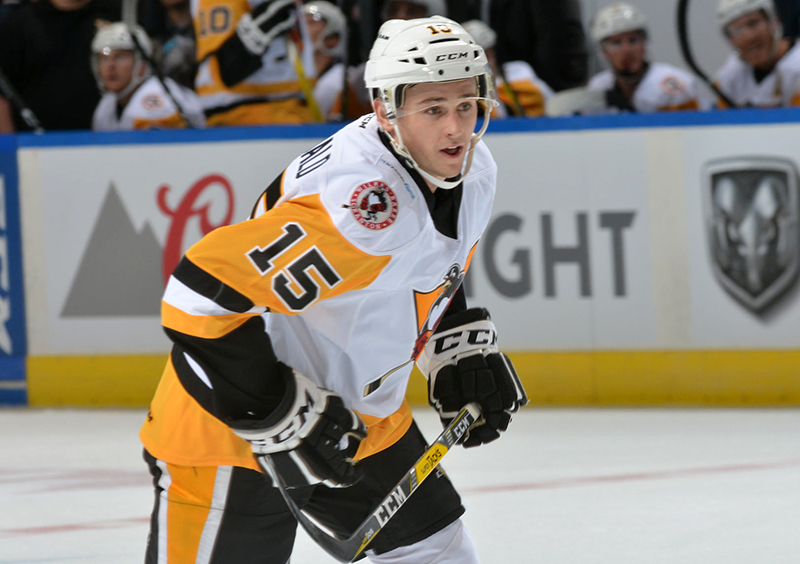 When Mike Sullivan went out of his way to bestow the moniker of “Buzzsaw” upon Josh Archibald, one could correctly surmise that the head coach, then of the Wilkes-Barre/Scranton Penguins, was a fan of the forward’s style of play.

When Sullivan ascended to become the head coach of the Pittsburgh Penguins, one might have also assumed that an NHL call-up would soon follow for Archibald.

But Archibald was not part of the group elevated from Wilkes-Barre/Scranton soon after Sullivan took over in Pittsburgh.  The 2011 6th-round pick instead was forced to watch as teammates, such as Conor Sheary and Scott Wilson, found permanent homes in the NHL and eventually lifted the Stanley Cup.

But patience paid off for Archibald.

Using the tenacity and speed that once drew the admiration of his head coach, Archibald earned a spot with Pittsburgh late in the 2016-17 season, and found himself hoisting Lord Stanley’s Cup.

The third-year pro got off to a fast start this past season with Wilkes-Barre/Scranton, skating alongside Oskar Sundqvist and Garrett Wilson to form one of the best lines in the Eastern Conference.  The trio combined for 60 points over the first 31 games of the campaign.

As the Penguins continued to jockey for positioning atop of the American Hockey League standings, Archibald had a career night on Feb. 4, posting two goals and an assist in a 7-1 pummeling of rival Lehigh Valley.

Less than a week later, the 24-year-old received his call-up to Pittsburgh and jetted across the country before taking the ice for his NHL season debut in Arizona.

“It was kind of a long trip.  I left New York and I don’t think I got to Arizona until about midnight and had to get up to do the morning routine, morning skate and video,” Archibald recalled.  “I was really excited to get back out there with the Penguins and show them what I had.”

Archibald showed both the Penguins and Coyotes what he had, notching his first two NHL goals to help Pittsburgh rally and earn a point on Feb. 11.  His first tally opened the scoring as he was quick to a rebound chance and snapped a backhander to the top of the net.

His second goal showed off the skills that made him one of the top performers for Wilkes-Barre/Scranton.

With the Penguins on the penalty kill, Arizona goaltender Mike Smith had trouble handling the puck near the no-touch zone.  Archibald came speeding in on the forecheck to cause havoc.

“It happened really fast,” recalled Archibald.  “[The puck] was almost in that awkward spot in the triangle where he can’t play it.  It was kind of sitting on the line.  So I think he hesitated a little bit and I got in on the forecheck.  I was able to recover it… …My body just took over and I was able to kick it up to myself with literally a wide open net.”

The bang-bang shorthanded goal with 5:22 to go pulled Pittsburgh within one and, with seconds left, Phil Kessel evened the score with the extra attacker. The Penguins ultimately fell in overtime, but Archibald could not have asked for a better personal performance in his season debut.

Archibald appeared in one more game for Pittsburgh before returning to the AHL, but was recalled for good at the end of the March.  While injuries provided the opportunity for the forward to move into the line-up, Archibald believes his speed, getting behind the defense and never giving up on plays helped to establish himself with the Penguins.

Ice time was sparse through the remainder of the regular season, and Archibald found himself in the press box through the first two rounds of the playoffs.  But as Pittsburgh advanced to Eastern Conference Final versus the Ottawa Senators, Archibald made his way back into the line-up for Game Four with his team trailing 2-1 in the series.  The guidance from coaches for his first-ever NHL postseason appearance was brief.

Archibald and the Penguins smacked down Ottawa in a 7-0 victory that tied up the Conference Final.  He went on to dress for two more contests as Pittsburgh defeated the Senators in seven games to make it back-to-back trips to the Stanley Cup Final.

The championship round saw the Penguins match-up against the Nashville Predators. Once again Archibald’s first appearance during the series came in Game Four.

“We felt we wanted to try to put some enthusiasm and energy and speed in the lineup,” Penguins coach Mike Sullivan told the Post-Gazette at the time. “Archie brings all those things to the table. He played some very solid games for us. He’s a guy that brings a certain dimension that we felt we wanted to have.”

Though the Predators knotted the series with a 4-1 win, it was an event that Archibald will forever savor.

“It was just one of those games, but it was a lot of fun,” Archibald said. “Great experience to get in a game like that.”

Of course, it is much easier to look back on such times when you end up on the winning side of history.  That is exactly what happened with the Penguins pitching consecutive shutouts  to claim their second straight Stanley Cup.  Though Game Four was Archibald’s lone contest played during the series, he was on the ice after the deciding contest to take his rightful turn lifting the coveted trophy in the air.  It was a moment that meant that much more with his college and Penguins teammate, Jake Guentzel, passing him the Cup.

“It was a pretty ecstatic moment for me.  For [Jake] to hand me that Cup to me after what we’ve been through kind of together, in college and then him coming into Wilkes-Barre at the end of last year and then even this year in Wilkes-Barre and Pittsburgh, it was pretty awesome.”

Archibald will get a crack at another Stanley Cup and a chance to build on his NHL resume, as he signed a two-year contract with Pittsburgh on July 13.  The one-way deal would seem to indicate a more permanent tenure at the NHL level for Archibald, who hopes that the end of the regular season and playoffs “were a good indication of what I can do.”

If life briefly settled down for Archibald following the Penguins’ Stanley Cup run, things are about to pick up big time in a short while.  Josh and his wife, Bailey, who were married last summer, are expecting their first child in the next week or two.

From marrying his college sweetheart last summer, to scoring his first NHL goals, getting his named etched on the Stanley Cup and soon to be welcoming a new addition to the family, it has been quite the year for Archibald.   There is little question as to where it ranks so far.

“Probably number one,” joked Archibald. “It definitely has been the best year so far.  Hopefully, we can keep building and have even better years from here on out.”