There are certain countries that are considered hockey powerhouses. Canada quickly comes to mind for most. So do Russia and the United States. Sweden is always a tough out in international play and Finland has been on a roll lately. Slovenia isn’t in that same pantheon.

Slovenia isn’t thought of as much of a hockey anything, really. In fact, a 2014 survey revealed less than 5% of Americans could even identify Slovenia on a map of Europe. But nestled south of Austria, east of Venice and west of Zagreb is where Penguins prospect Jan Drozg grew up and where he found his love for hockey.

Only three Slovenians have ever played in the NHL: Greg Kuznik, Jan Muršak and Anže Kopitar. Drozg is using the Prospects Showcase in Buffalo as a stepping stone as he tries to climb the ladder and become the fourth name on that list.

“I always looked up to the NHL stars,” he said. “And Anže Kopitar, he’s a very good player. He does a lot of things very well. It’s easy for a Slovenian like him to be a model.” 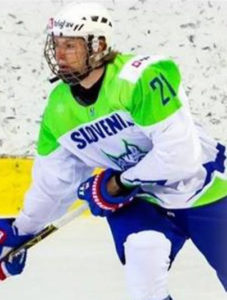 Drozg was taken by Pittsburgh as a bit of a surprise pick in the fifth round of this past NHL Entry Draft. Not many knew his name, but the Penguins’ European scouts that saw him play for the Leksands U18 junior program in Sweden knew he had a skillset they couldn’t pass up. Through two games in Buffalo at the Prospects Showcase, that offensive flair has been apparent. He’s created scoring chances, shown off some slick hands as well the the kind of straight-ahead speed that the Penguins organization has coveted in recent years.

That isn’t to say Drozg isn’t the perfect player yet. If he wants to become the fourth Slovenian to make it to the NHL, he’s already been made well aware of where he needs to improve.

“I need to get stronger down low, in the corners,” he said. “That’s something the coaches have told me and I’m focused on it.”

The 18-year-old Drozg also recognizes the weight on his shoulders considering Slovenia’s history (or lack thereof) in the NHL and international hockey. He’s the first to admit that hockey doesn’t occupy the national consciousness very often. Frankly, it’s an afterthought compared to other popular European sports like soccer. But at a particular time of year, the country rallies around it’s hockey players.

Today, his efforts are dialed in on improving so that he can make an impression of Penguins coaches and scouts and get himself in good graces for seasons down the line.

Drozg will not play for Wilkes-Barre/Scranton or Pittsburgh this season, although he will get the opportunity to acclimate himself to the North American game as a member of the Shawinigan Cataractes of the Québec Major Junior Hockey League. Beyond that, Drozg will have the Penguins and his country watching closely to see the steps he takes towards making the NHL.

• Coach Clark Donatelli has been very complimentary of Teddy Blueger’s skating throughout the week, an identified area of improvement after last season. More on this later in the week.

• The Penguins prospects’ last game of the 2017 Prospects Showcase will obstensibly also serve as the Final for the tournament. Both the Penguins and their Monday night opponent, the Buffalo Sabres, have the most points through two games, posting an identical 1-0-1 record. Whoever wins their showdown tonight will be Prospect Showcase Champions.