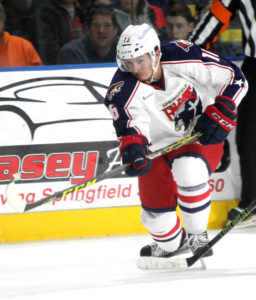 WILKES-BARRE, Pa. – The Wilkes-Barre/Scranton Penguins announced today that they have signed forward Christian Thomas to an American Hockey League contract for the 2017-18 season.

Thomas is coming off of his best season in the American Hockey League last year, establishing career highs in goals (24), assists (25) and points (49) over the course of 65 games with the Hershey Bears. The 25-year old also established himself as a power play specialist, tallying 12 man advantage markers, good enough for fifth-most in the AHL.

Throughout his AHL career, Thomas has posted 76 goals and 80 assists for 156 points in 284 games with the Bears, Connecticut Whale, Hamilton Bulldogs, St. John’s IceCaps and Springfield Falcons. The Toronto, Ontario native has also logged 27 NHL games in which he’s earned one goal and two assists.

His father, Steve Thomas, played in the AHL from 1984-86 for the St. Catherines Saints. Steve went on to have an NHL career of over 1200 games and 933 points (421G-512A) with the Toronto Maple Leafs, Chicago Blackhawks, New York Islanders, New Jersey Devils, Detroit Red Wings and the Mighty Ducks of Anaheim.

Christian Thomas and the Penguins will open their next season on Oct. 7 against the Charlotte Checkers at Mohegan Sun Arena at Casey Plaza. Season ticket packages for the 2017-18 season of Wilkes-Barre/Scranton Penguins hockey, including full season, 22-game, 12-game and Flexbook plans, are available by contacting the Penguins directly at (570) 208-7367.