WILKES-BARRE, Pa. – The Wilkes-Barre/Scranton Penguins rode an explosive first period to a 6-2 victory over the Binghamton Devils in preseason action at Mohegan Sun Arena at Casey Plaza on Friday night.

Wilkes-Barre/Scranton racked up four goals in the first 20 minutes of play and saw multi-point nights from six different players en route to its first win of the exhibition schedule. 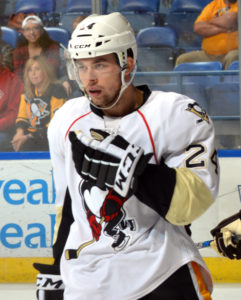 back, no-look pass from Tom Kostopoulos and depositing it into the Devils’ net at 5:36 of the first period. Kostopoulos earned a goal of his own during a five-on-three power play at 11:53 of the first, and Adam Johnson made it 3-0 just one minute later.

Binghamton responded with a man advantage marker from Jan Mandát at 15:11 of the opening frame, but Wilkes-Barre/Scranton got back out to a three-goal lead when Zach Trotman’s slapshot snuck through Scott Wedgewood’s goaltending equipment and across the goal line 49 seconds prior to intermission.

The Penguins’ Dominik Simon and the Devils’ Nathan Bastian traded goals during the second period, bringing the score to 5-2.

Kevin Czuczman notched the final goal of the game midway through the third period.

Tristan Jarry denied the Devils on 15 of the 17 shots he faced, while Wedgewood made 24 saves in the loss.

The Penguins’ next preseason game is tomorrow Saturday, Sept. 30, when they take on the Hershey Bears at Giant Center. Puck drop is scheduled for 7:00 p.m.

PENGUINS CRUISE TO 5-1 WIN AT SYRACUSE

PENGUINS’ STREAK AT SIX AFTER 2-1, OT THRILLER IN HERSHEY