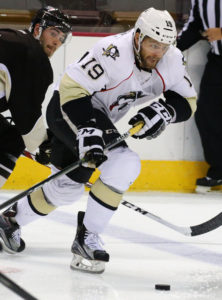 HERSHEY, Pa. – The Wilkes-Barre/Scranton Penguins walked away from a tight-knit match-up with a 3-2 win against the Hershey Bears at Giant Center on Saturday night thanks to an overtime game-winner by defenseman Frank Corrado.

Corrado’s goal at 2:29 of the extra period allowed the Penguins to exact revenge on the Bears, who defeated Wilkes-Barre/Scranton in the two teams’ preseason opener three days earlier.

Jean-Sébastien Dea opened the scoring when he picked the top corner of the Bears’ net with a snipe from the left slot 7:52 into the first period.

The Penguins went up 2-0 thanks to Reid Gardiner’s tally off of a face-off win by Jarrett Burton at 1:25 of the middle frame. Hershey cut Wilkes-Barre/Scranton’s lead in half with a goal by Dustin Gazley roughly nine minutes later.

With a late-game power play and the goalie pulled in favor of an extra attacker, the Bears’ Chris Bourque notched the equalizer at 18:22 of the third period.

Hershey appeared to be poised to take off on a three-on-none rush in overtime when Dea picked the pocket of one of the Bears before dishing the puck to a wide-open Corrado, who fired home for the sudden death game-winner.

Casey DeSmith manned the crease for the Penguins for all three periods of regulation and overtime, making 21 saves in the process. Parker Milner stopped 14 of 16 shots faced before being replaced mid-game by Adam Carlson. Carlson recorded 20 stops while being given the loss.

The Penguins’ next preseason game is tomorrow, Sunday, Oct. 1, when they take on the Binghamton Devils at Floyd L. Maines Veterans Memorial Arena. Puck drop is scheduled for 5:00 p.m.