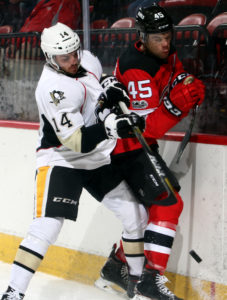 Penguins forward Jean-Sébastien Dea scored for the second-straight game, but the Devils pulled away from their opposition with two goals in the third period.

Nathan Bastian put Binghamton on the board first with his second goal of the preseason, a power play tally at 12:44 of the opening frame.

Wilkes-Barre/Scranton answered back with a man advantage marker of its own 4:32 into the second stanza. Dea took a cross-crease pass from Cody Wydo, was initially denied by Mackenzie Blackwood until Dea popped his own rebound over the Devils goalie’s pad and across the goal line.

The Devils popped back on top, 2-1, courtesy of Blake Pietila midway through the third period. Chris Calnan tacked on an insurance marker with 6:44 remaining in regulation.

Tristan Jarry denied the Devils on 26 of the 29 shots turned his way over the course of the game. Blackwood notched 25 saves in the win for Binghamton.