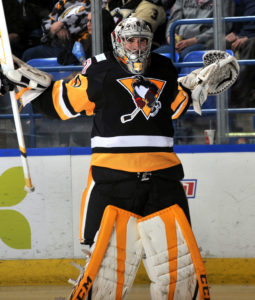 WILKES-BARRE, Pa. – The Wilkes-Barre/Scranton Penguins announced today that goaltender Sean Maguire has been removed from the team’s training camp roster and will report to the Penguins’ ECHL affiliate, the Wheeling Nailers.

Maguire appeared in 35 games for Wheeling last season, posting a 14-16-4 record with two shutouts, a .897 save percentage and 3.20 goals against average. The native of Powell River, British Columbia was named ECHL CCM Goaltender of the Month for January after putting forth a 6-1-1 record and both of his season’s   shutouts in 9 games. Maguire also played in one game for Wilkes-Barre/Scranton last year and earned the win for the Penguins in their Macgregor Kilpatrick Trophy-clinching victory over the Bridgeport Sound Tigers on Apr. 15, 2017

The 24-year-old netminder was selected in the fourth round (113th overall) by Pittsburgh at the 2012 NHL Entry Draft.