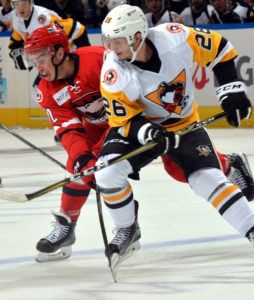 WILKES-BARRE, Pa. – Daniel Sprong notched his first regular season goal with the Wilkes-Barre/Scranton Penguins, but the team ultimately fell, 5-2, in their 2017-18 season opener to the Charlotte Checkers at Mohegan Sun Arena at Casey Plaza on Saturday night.

Wilkes-Barre/Scranton (0-1-0-0) surrendered back-to-back shorthanded tallies to Charlotte (2-0-0-0) rookie Warren Foegele, who has kicked off his pro career with four goals and two game-winning goals in his first two games.

The Penguins’ first goal of the season came from Sprong on the power play when he scorched a wrist shot past the blocker side of Jeremy Smith at 7:40 of the opening frame.

Valentin Zykov notched a goal for Charlotte with only 1:59 remaining in the first period, evening the score at 1-1.

The second period became a special teams fest for both clubs, with Charlotte and Wilkes-Barre/Scranton combining for seven power play opportunities in the middle stanza. Thomas Di Pauli used a shorthanded goal at 14:46 of the second period to give the Penguins a 2-1 lead, but that was taken away three minutes later by a man advantage marker from the Checkers’ Phil Di Giuseppe.

Foegele gave Charlotte its first lead of the contest, 3-2, with a shorthanded tally with less than a minute left before the second intermission. Foegele found the back of the net again with yet another shorthanded goal 9:37 into the third period, making it 4-2, Charlotte.

Di Giuseppe nailed a long-distance empty-net goal in final two minutes of regulation, bringing the game to its final score of 5-2.

Tristan Jarry posted 31 saves in net for the Penguins. Smith stopped 28 of the 30 shots he faced.