WILKES-BARRE, Pa. – The Wilkes-Barre/Scranton Penguins earned their first win of the 2017-18 season in convincing fashion as Casey DeSmith’s 33-save shutout led the team to a 5-0 triumph over the Lehigh Valley Phantoms on Friday night at Mohegan Sun Arena at Casey Plaza.

Wilkes-Barre/Scranton (1-1-0-0) had five different players account for its five goals, while DeSmith recorded the second clean sheet of his career.

After outlasting an early blitzkrieg by the Phantoms, the Penguins’ first goal of the game came from Tom Sestito on Wilkes-Barre/Scranton’s very first shot of the contest. Thomas Di Pauli outraced Lehigh Valley defenseman Samuel Morin on an impending icing call, then whipped around the net and set-up Sestito for the opening tally at 6:21 of the first period.

The third Penguins goal came at 7:52 of the second period as Frank Corrado’s fluttering shot from the point fooled Alex Lyon. Jean-Sébastien Dea made it 4-0 at 15:19 of the middle frame with the help of tic-tac-toe passing from Tom Kostopoulos and Adam Johnson. Lyon was pulled from the Phantoms net following Dea’s goal and replaced by Dustin Tokarski. 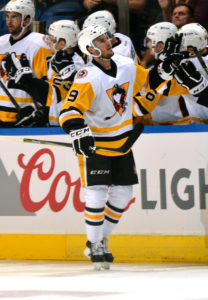 Tokarski was perfect in relief of Lyon for over 20 minutes of action until the Penguins found another man advantage marker, this time coming from Dominik Simon. Simon closed out the scoring in the 5-0 contest with 2:51 left in regulation.

Johnson (2A), Kevin Czuczman (2A), Zach Trotman (1A) and Dylan Zink (1) all earned their first points as Penguins throughout the course of the evening, as well.

Wilkes-Barre/Scranton’s penalty kill was a perfect seven-for-seven on the night, and its power play unit converted on two of its six opportunities.

Phantoms goalie Alex Lyon finished with 11 saves on 15 shots before being replaced by Tokarski, who posted eight saves on nine shots.

The Penguins and Phantoms face-off again tomorrow, Saturday, Oct. 14, when the two clubs drop the puck at Lehigh Valley’s PPL Center. Wilkes-Barre/Scranton’s next home game Sunday, Oct. 15 against the Syracuse Crunch at 3:05 p.m. Individual tickets for all Penguins home games are available at the Mohegan Sun Arena at Casey Plaza box office, online at TicketMaster.com, or by calling 800-745-3000.