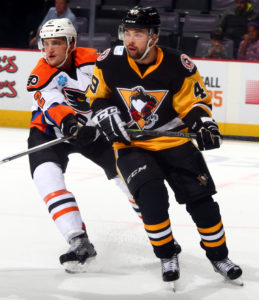 ALLENTOWN, Pa. – The Wilkes-Barre/Scranton Penguins used a late-game surge to make things interesting between them and the Lehigh Valley Phantoms, but ultimately fell short, 3-2, at PPL Center on Saturday night.

Daniel Sprong kick-started Wilkes-Barre/Scranton’s (1-2-0-0) comeback effort by scoring for the third-straight game, only for him and his teammates to see the Phantoms hold on in the final seconds of regulation.

Lehigh Valley notched the game’s opening goal, converting on a power play for the team’s first man advantage marker of the season. Matt Read was credited with the go-ahead tally at 16:30 of the first period.

The Phantoms added another goal when Mike Vecchione rifled in his first goal as a pro midway through the middle frame, and Greg Carey extended their lead to 3-0 in the first two minutes of the third period.

Sprong pulled the Penguins within two by registering his third power play goal of the season 5:05 into the third period. Garrett Wilson cut the deficit to only one when he shoveled in a rebound lingering around the Phantoms’ net with 3:07 remaining in regulation.

Tristan Jarry made 32 saves while manning the pipes for the Penguins, including a penalty shot save on the Phantoms’ Danick Martel when it was still a two-goal game. Alex Lyon bounced back from a loss the day before to rack up 27 saves for the win.