Penguins use offensive outburst for first two wins of the season 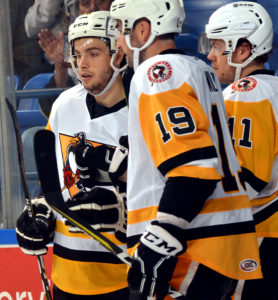 Friday, Oct. 13 – PENGUINS 5 vs. Lehigh Valley 0
Wilkes-Barre/Scranton earned its first win of the 2017-18 campaign on the back of a 33-save shutout by Casey DeSmith. Tom Sestito tallied the eventual game-winner at 6:21 of the first period, while Daniel Sprong went on to score his second goal of the season with a power play goal.

Saturday, Oct. 14 – PENGUINS 2 at Lehigh Valley 3
The Penguins scored twice in the final period of play, but their comeback fell short against the Phantoms at PPL Center. Sprong kick-started Wilkes-Barre/Scranton’s comeback by scoring for the third game in a row. Garrett Wilson later notched his first of the season to pull the Penguins within one, but they never found the late-game equalizer.

Sunday, Oct. 15 – PENGUINS 6 vs. Syracuse 1
Six different Penguins scored in their bounce-back victory during a Sunday matinée with the defending Eastern Conference champions. Gage Quinney scored a goal and had two assists in his AHL debut, and Sprong found the back of the net for the fourth-straight game. Christian Thomas scored his first goal with Wilkes-Barre/Scranton, as well.

Friday, Oct. 20 – PENGUINS vs. Laval
Wilkes-Barre/Scranton will try and string together a winning streak when it welcomes the Laval Rocket to Mohegan Sun Arena at Casey Plaza for the first time ever. The Rocket have scored the most goals in the AHL this season (19).

Saturday, Oct. 21 – PENGUINS vs. Hartford
Hartford finished last in the AHL last season, but they’re off to a hot start in 2017-18 and tied for the best record in the Atlantic Division (3-1-0-0). The Penguins swept their season series with the Wolf Pack last season, going 6-0-0-0.

– Wilkes-Barre/Scranton went 7-1-0-1 in the third game of its three-in-three weekends last season and is already 1-0-0-0 at the back-end of three-in-threes this season.

– The Penguins received offense from five and six different goal scorers in its two wins this past weekend.

– Casey DeSmith still has not allowed a goal at even strength this season.

– Including the 2016 Calder Cup Playoffs, five of Daniel Sprong’s nine AHL goals have come on the power play.

– Tom Sestito is one game away from playing his 500th professional game.