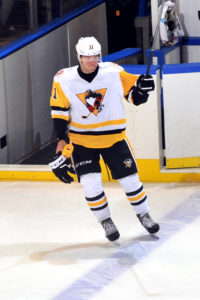 WILKES-BARRE, Pa. – When the dust settled at Mohegan Sun Arena at Casey Plaza, the Wilkes-Barre/Scranton Penguins came out on top of a back-and-forth, electrifying, adrenaline-pumping, 6-5 overtime game against the Laval Rocket on Friday night.

Daniel Sprong netted a hat trick and helped power the Penguins (3-2-0-0) past the Rocket, who were facing one another for the first time in franchise history.

Sprong wasted no time extending his goal-scoring streak to five games when he fired a wicked wrister into the top corner 5:48 into the game, giving Wilkes-Barre/Scranton an early 1-0 lead.

The Rocket answered three minutes later when Chris Terry scored his team-leading fourth goal of the season, and then Laval took a 2-1 lead at 12:03 of the opening frame after a blistering slap shot from Tom Parisi.

The Penguins and Rocket continued to trade goals throughout the remaining eight minutes of the first period with Sprong and Kostopoulos finding the back of the net for the home squad and David Broll tallying for Laval. The two clubs combined for six goals in the opening stanza, skating to a 3-3 tie at the conclusion of the first 20 minutes.

Éric Gélinas reestablished the Rocket’s lead during a power play at 5:15 of the middle frame, only to see Gage Quinney even things up again fourteen seconds later.

Laval was able to carry a one-goal advantage into the second intermission after Nikita Scherbak set up Michael McCarron with a pretty feed from the slot with only 1:40 left in the period.

The third frame didn’t see as much offense as the previous two, but the Penguins were able to capitalize on a five-on-three man advantage at 10:41, tying the score at five goals apiece. Naturally, Sprong was the scorer for Wilkes-Barre/Scranton as he notched his league-leading fifth power play goal of the season to complete his first professional hat trick.

Teddy Blueger sent the crowd home happy with the overtime game-winning goal with 2:16 left in the extra period.

Tristan Jarry saved 28 out of 33 shots he faced to earn his first win of the season. Charlie Lindgren made 31 out of 37 saves for the Rocket.

Wilkes-Barre/Scranton’s next game is tomorrow, Saturday, Oct. 21, against the Hartford Wolf Pack at Mohegan Sun Arena at Casey Plaza. Puck drop between the Penguins and Wolf Pack is scheduled for 7:05 p.m. Individual tickets for all Penguins home games are available at the Mohegan Sun Arena at Casey Plaza box office, online at TicketMaster.com, or by calling 800-745-3000.