WILKES-BARRE, Pa. – The Wilkes-Barre/Scranton Penguins went to the their first shootout of the season on Saturday night and came away with a 3-2 win over the Hartford Wolf Pack at Mohegan Sun Arena at Casey Plaza.

The Penguins (4-2-0-0) overcame a two-goal deficit to force overtime and won the best-of-three shootout on a lone goal by Jean-Sébastien Dea.

Hartford got the scoring started with a power play goal from Scott Kosmachuk at the side of the cage just 2:59 into the opening frame. The man advantage was effective once again for the Wolf Pack as Vinni Lettieri made it 2-0 at 11:17 of the first period.

After that, Casey DeSmith battened down the hatches and denied the Wolf Pack on 26 of the 28 shots he faced throughout the contest. 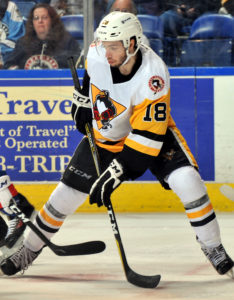 The Penguins answered the Wolf Pack’s second power play goal 34 seconds later when Gage Quinney was the beneficiary of a loose puck amid a wild, net-mouth scramble. Quinney has scored a goal in all three of his AHL games so far this season.

Jarrett Burton evened things up, 2-2, with his first goal of the season with 4:26 left in the second period.

Both teams were held scoreless in the third frame. Hartford goalie Alexandar Georgiev stopped a 16-shot barrage from the Penguins in the third period, while DeSmith was required to come up with several stops in the final minutes of regulation. Wilkes-Barre/Scranton outshot Hartford 5-0 in overtime, but five extra minutes of three-on-three hockey still did not yield a winner.

Dea played the hero’s role for the Penguins, scoring the only goal of the shootout in the second round.

In addition to blanking the Wolf Pack on all three of their shootout attempts, DeSmith improved to 3-0-0 on the season and still has not allowed a goal at even strength in 2017-18.

Georgiev made 41 saves on 43 shots faced in regulation and overtime.