WILKES-BARRE, Pa. – The Wilkes-Barre/Scranton Penguins won the first match-up of the season series in the I-81 rivalry as they beat the Hershey Bears, 3-2, on Friday night at Mohegan Sun Arena at Casey Plaza.

The Penguins (5-2-0-0) relied heavily an impressive 30-save performance from goalie Tristan Jarry to capture their fourth-straight victory. 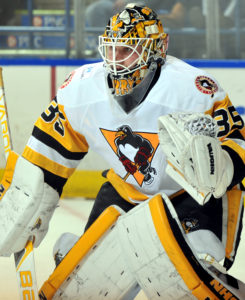 With 3:46 remaining in the second period, the Penguins doubled their lead when Teddy Blueger’s wrist shot dipped underneath Adam Carlson’s glove and found the back of the net. However, the Bears reduced the deficit back down to one a little over a minute later thanks to a shorthand goal from Jeremy Langlois.

Riley Barber netted a third period equalizer 6:34 into the final frame of regulation.

Simon scored the game-winning goal at 10:52 in the third period off a rebound from a Kevin Czuczman shot attempt. Despite a heavy press by Hershey in the final 10 minutes of regulation, Wilkes-Barre/Scranton never surrendered their 3-2 lead thanks to the stellar, crunch-time effort by Jarry.

The Penguins penalty kill ultimately denied the Bears on all seven of their man advantage opportunities throughout the contest. Wilkes-Barre/Scranton’s power play, on the other hand, went one-for-three.

Wilkes-Barre/Scranton’s next game is tomorrow, Saturday, Oct. 28, when it visits the Bridgeport Sound Tigers. The Penguins’ next home game will be on Sunday, Nov. 5, and once again they’ll take on the Hershey Bears. Puck drop for the Sunday matinée between the two bitter rivals is scheduled for 3:05 p.m. at Mohegan Sun Arena at Casey Plaza. Individual tickets for all Penguins home games are available at the Mohegan Sun Arena at Casey Plaza box office, online at TicketMaster.com, or by calling 800-745-3000.