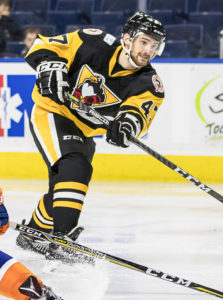 BRIDGEPORT, Conn. – The Wilkes-Barre/Scranton Penguins earned their first road win of the season and extended their winning streak to five games with a 5-2 triumph over the Bridgeport Sound Tigers at Webster Bank Arena on Saturday night.

Wilkes-Barre/Scranton (6-2-0-0) saw multi-point nights from a handful of players, but perhaps no performance was more key than that of Ryan Haggerty, who scored twice in his season debut.

Bridgeport wasted little time getting the scoring started, notching the game’s first goal just 1:19 into the contest. Steve Bernier took a breakaway pass from Ryan Bourque and fought off the Penguins’ backcheck to give the home team an early 1-0 lead.

Tom Sestito provided a response by beating Kristers Gudļevskis to the blocker side on a rebound at 13:27 of the first period.

The Sound Tigers tallied even earlier at the start of the second period, with captain Ben Holmstrom sneaking a sharp-angle shot through Tristan Jarry 52 seconds into the middle frame.

Wilkes-Barre/Scranton received a pair of goals from players registering their first goal of the season to take a 3-2 advantage into the second intermission. Adam Johnson buried his first AHL goal on a power play at 7:33 of the second stanza, and Haggerty outraced the Sound Tigers defense to give the Penguins their first lead of the night with three minutes before the break.

The Penguins staved off a heavy press from the Sound Tigers late in the third period, and actually extended their lead to 4-2 off of a picture perfect passing play that culminated in a Christian Thomas tap-in at the crease with 2:52 left in regulation. Haggerty tucked an empty netter for his second of the night.

Jarry started between the pipes for the Penguins for the second night in a row, and made 18 saves for the victory. Gudļevskis turned aside 20 of the 24 shots he faced.

Wilkes-Barre/Scranton’s next game is Friday, Nov. 3, when it faces off against the Lehigh Valley Phantoms at PPL Center. The Penguins’ next home game will be on Sunday, Nov. 5, and they’ll take on their other in-state rival, the Hershey Bears. Puck drop for the Sunday matinée between the Penguins and Bears is scheduled for 3:05 p.m. at Mohegan Sun Arena at Casey Plaza. Individual tickets for all Penguins home games are available at the Mohegan Sun Arena at Casey Plaza box office, online at TicketMaster.com, or by calling 800-745-3000.